The map-reduce paradigm is often used when there is ONE task to perform and you want to assign a portion of the work to each thread. A different scenario is when you have SEVERAL independent tasks to perform. You can assign each task to a separate thread and ask each thread to compute an entire task. The iml action supports the PARTASKS function (short for "parallel tasks") for running tasks in separate threads. This article shows a simple example.

Suppose you have three tasks. The first takes 2 seconds to run, the next takes 0.5 seconds, and the third takes 1 second. If you run a set of tasks sequentially, the total time is the sum of the times for the individual tasks: 2 + 0.5 + 1 = 3.5 seconds. In contrast, if you run the tasks in parallel, the total time is the maximum of the individual times: 2 seconds. Running the tasks in parallel saves time, and the speed-up depends on the ratio of the largest time to the total time, which is 2/3.5 in this example. Thus, the time for the parallel computation is 57% of the time for the sequential computation.

In general, the largest speedup occurs when the tasks each run in about the same time. In that situation (ignoring overhead costs), the time reduction can be as much 1/k when you run k tasks in k threads.

The previous computations are performed by directly calling three built-in SAS/IML functions. Of course, in practice, the tasks will be more complex than these. Almost surely, each task will be encapsulated into a SAS/IML module. To emulate that process, I am going to define three trivial "task modules." The following statements perform The same computations, but now each "task" is performed by calling a user-written module:

The syntax of the PARTASKS function

You can use the PARTASKS function to run the three tasks concurrently. To use the PARTASKS function, each task must be a user-defined SAS/IML function that has exactly one input argument and returns one output argument. For our example, the detTask, invTask, and eigvalTask modules satisfy these requirements. (If a task requires more than one input argument, you can pack the arguments into a list and pass the list as a single argument.)

Suppose you are running SAS Viya and you use the have access to a machine that has at least four threads. You can use the CAS statement to define a session that will use only one machine (no worker nodes). The CAS statement might look something like this:
cas sess0 host='your_host_name' casuser='your_username' port=&YourPort; /* SMP, 0 workers */
Then you can run the PARTASKS function by making the following call to the iml action. If you are not familiar with the iml action, see the getting started example for the iml action.

The results are identical to the sequential computations in PROC IML. However, this program executes the three tasks in parallel, so the total time for the computations is the time required by the longest task.

You can use the following diagram to help visualize the program. (Click to enlarge.) 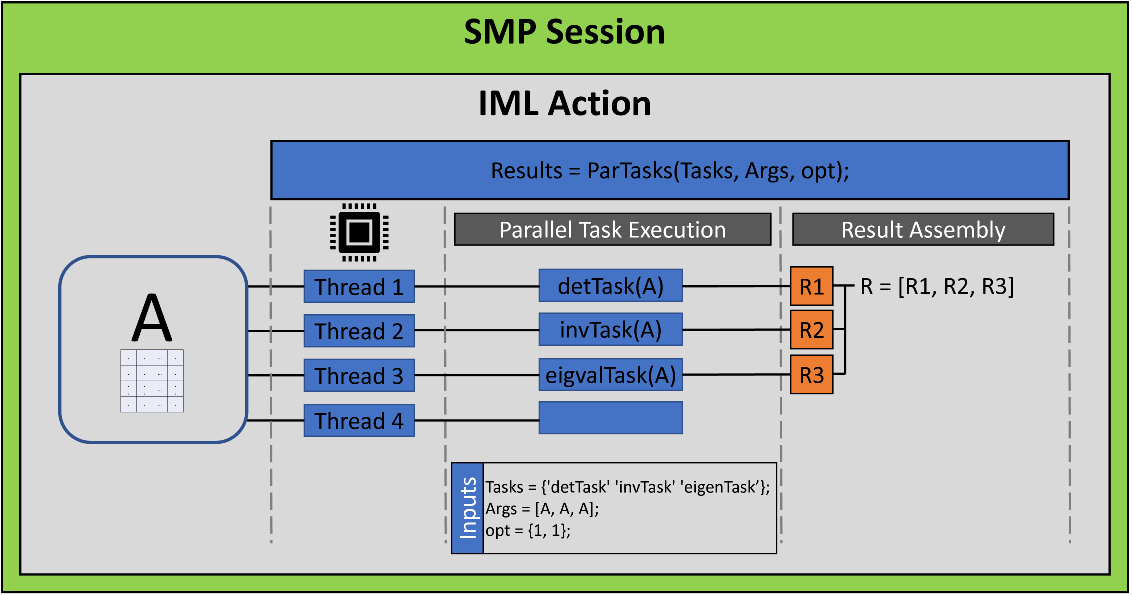 The diagram shows the following:

This article demonstrates a simple call to the PARTASKS function in the iml action, which is available in SAS Viya 3.5. The example shows how to distribute tasks among k threads. Each thread runs concurrently and independently. The total time for the computation depends on the longest time that any one thread spends on its computation.

This example is simple but demonstrates the main ideas of distributing tasks in parallel. In a future article, I will present a more compelling example.

The post Run tasks in parallel in SAS Viya appeared first on The DO Loop.