A common operation in statistical data analysis is to center and scale a numerical variable. This operation is conceptually easy: you subtract the mean of the variable and divide by the variable's standard deviation. Recently, I wanted to perform a slight variation of the usual standardization:

Although you can write SAS DATA step code to center and scale the data, PROC STDIZE in SAS contains options that handle both these cases. 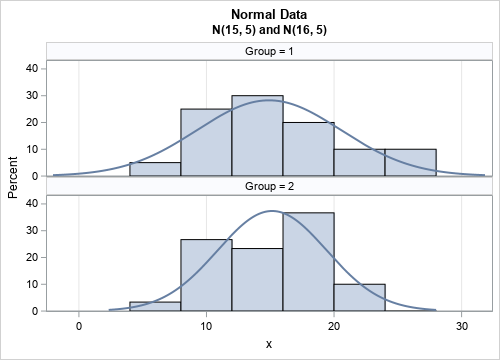 The graph shows a comparative histogram of the distribution of each group and overlays the density of the normal curve that best fits the data. You can run PROC MEANS to calculate that the estimates for the first group are mean=14.9 and StdDev=5.64. For the second group, the estimates are mean=15.15 and StdDev=4.27.

As expected, each sample now has mean=0 and unit standard deviation. Many multivariate analyses center and scale data in order to adjust for the fact that different variables are measured on different scales. PROC STDIZE has many other options for standardizing data.

Center and scale by using the DATA step

A second way to standardize the data is to use the DATA step to center and scale each variable and each group. You can overwrite the contents of each column, or (as I've done below), you can create a new variable that contains the standardized values. You need to specify values for the location and scale parameters. For these simulated data, I know the population values of the location and scale parameters. The following DATA step uses the parameters to center and scale the data:

Because I use the population parameters instead of the sample estimates, the transformed variable does not have zero mean nor unit variance.

Wide form: Use the LOCATION and SCALE statements in PROC STDIZE

You can specify the parameters in "wide form" or in "long form". In wide form, each column specifies a parameter and you can include multiple rows if you want to perform a BY-group analysis. You can use the LOCATION and SCALE statements to specify the name of the variables that contain the parameters. The following DATA step creates a data set that has three variables: Group, Mu, and Sigma. Each row specifies the location and scale parameter for centering and scaling data in the levels of the Group variable.

The output is identical to the output from the previous section and is not shown.

Long form: Use the _TYPE_ variable

You can also specify the location and scale parameters in long form. For a long-form specification, you need to create a data set that contains a variable named _TYPE_. The parameters for centering and scaling are specified in rows where _TYPE_="LOCATION" and _TYPE_="SCALE", respectively. You can also include one or more BY-group variables (if you are using the BY statement) and one or more columns whose names are the same as the variables you intend to transform.

For example, the example data in this article has a BY-group variable named Group and an analysis variable named X. The following DATA step specifies the values to use to center (_TYPE_='LOCATION') and scale (_TYPE_='SCALE') the X variable for each group:

Again, the result (not shown) is the same as when the DATA step is used to center and scale the data.

This article gives examples of using PROC STDIZE in SAS/STAT to center and scale data. Most analysts want to standardize data in groups by using the sample means and sample standard deviations of each group. This is the default behavior of PROC STDIZE. However, you can also center and scale data by using values that are different from the group statistics. For example, you might want to use a grand mean and a pooled standard deviation for the groups. Or, perhaps you are using simulated data and you know the population mean and variance of each group. Regardless, there are three ways to center and scale the data when you know the location and scale parameters:

The post 4 ways to standardize data in SAS appeared first on The DO Loop.