I recently showed how to use simulation to estimate the power of a statistical hypothesis test. The example (a two-sample t test for the difference of means) is a simple SAS/IML module that is very fast. Fast is good because often you want to perform a sequence of simulations over a range of parameter values to construct a power curve. If you need to examine 100 sets of parameter values, you would expect the full computation to take about 100 times longer than one simulation.

Use simulation to estimate a power curve

I previously showed how to use simulation to estimate the power of a statistical test. In that article, I simulated data from N(15,5) and N(16,5) distributions. Because the t test is invariant under centering and scaling operations, this study is mathematically equivalent to simulating from the N(0,1) and N(0.2,1) distributions. (Subtract 15 and divide by 5.) 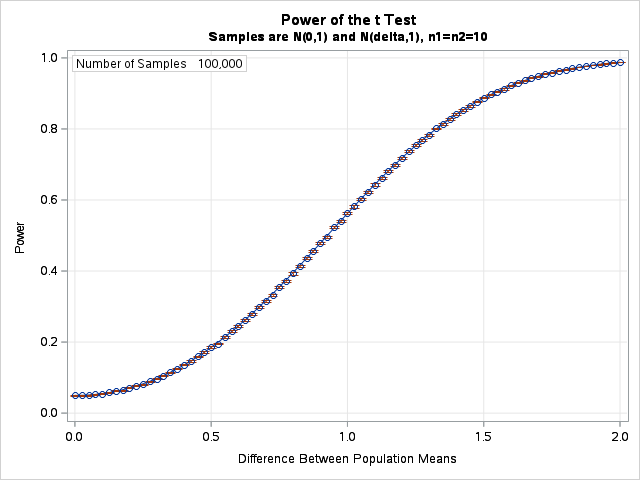 Recall that the power of a statistical hypothesis test is the probability of making a Type 2 error. A Type 2 error is rejecting the null hypothesis when the alternative hypothesis is true. The power depends on the sample sizes and the magnitude of the effect you are trying to detect. In this case, the effect is the difference between two means. You can study how the power depends on the mean difference by estimating the power for a t test between data from an N(0,1) distribution and an N(δ, 1) distribution, where δ is a parameter in the interval [0, 2]. All hypothesis tests in this article use the α=0.05 significance level.

The power curve we want to estimate is shown to the right. The horizontal axis is the δ parameter, which represents the true difference between the population means. Each point on the curve is an estimate of the power of a two-sample t test for random samples of size n1 = n2 = 10. The curve indicates that when there is no difference between the means, you will conclude otherwise in 5% of random samples (because α=0.05). For larger differences, the probability of detecting the difference increases. If the difference is very large (more than 1.5 standard deviations apart), more than 90% of random samples will correctly reject the null hypothesis in the t test.

So how long did it take to compute this power curve, which is the result of 8.1 million t tests? About 0.4 seconds by using parallel computations in the iml action.

Here's how you can write a program in the iml action to run 81 simulations across 32 threads. The following program uses four nodes, each with 8 threads, but you can achieve similar results by using other configurations. The main parts of the program are as follows:

You can pull the 81 statistics back to a SAS data set and use PROC SGPLOT to plot the results. You can download the complete program that generates the statistics and graphs the power curve.

Notice that there are 81 tasks but only 32 threads. That is not a problem. The PARTASKS tries to distribute the workload as evenly as possible. In this example, 17 threads are assigned three tasks and 15 threads are assigned two tasks. If T is the time required to perform one power estimate, the total time to compute the power curve will be approximately 3T, plus "overhead costs" such as the time required to set up the problem, distribute the parameters to each task, and aggregate the results. You can minimize the overhead costs by passing only small amounts of data across nodes.

In summary, if you have a series of independent tasks in IML, you can use the PARTASKS function to distribute tasks to available threads. The speedup can be dramatic; it depends on the time required for the thread that performs the most work.

This article shows an example of using the PARTASKS function in the iml action, which is available in SAS Viya 3.5. The example shows how to distribute a sequence of computations among k threads that run concurrently and independently. In this example, k=32. Because the tasks are essentially identical, each thread computes 2/32 or 3/32 of the total work. The results from each task are returned in a list, where they can be further processed by the main program.

The post Estimate a power curve in parallel in SAS Viya appeared first on The DO Loop.