I have previously blogged about several ways to find the roots of nonlinear equations in SAS, including:

The DATA step does not have a built-in root-finding function, but you can implement one by using PROC FCMP.

PROC FCMP enables you to write user-defined functions that can be called from the DATA step and from SAS procedures that support DATA step programming statements (such as PROC NLIN, PROC NLMIXED, and PROC MCMC). To demonstrate finding the roots of a custom function, let's use the same function that I used to show how to find roots by using SAS/IML. The following statements use PROC FCMP to define a function (FUNC1) and to store the function to WORK.FUNCS. You must use the CMPLIB= system option to tell the DATA step to look in WORK.FUNCS for unknown functions. The DATA step evaluates the function for input arguments in the interval [-3, 3]. The SGPLOT procedure creates a graph of the function: 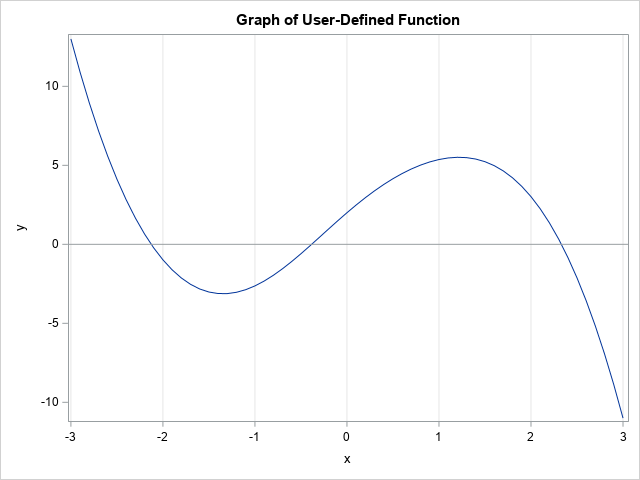 From the graph, it appears that the function has three roots (zeros). The approximate locations of the roots are {-2.13, -0.38, 2.33}, as found in my previous article. The next section shows how to use the SOLVE function in PROC FCMP to find these roots.

Use the SOLVE function to find roots

The following SAS program defines a new FCMP function called Root_Func1. That function takes one argument, which is the initial guess for a root. Inside the function, the SOLVE function finds the root of the "Func1" function (defined earlier). If it was successful, it returns the root to the caller. To test the Root_Func1 function, I call it from a DATA step and pass in the values -2, 0, and +2. I obtained these guesses by looking at the graph of the Func1 function.

The output shows that the function has found three roots, which are approximately {-2.13, -0.38, 2.33}. These are the same values that I found by using the FROOT function in SAS/IML.

The roots of functions that have parameters

Sometimes it is useful to include parameters in a function. For example, the following function of x contains two parameters, a and b:
g(x; a, b) = exp(-x2) + a*x3 + b*x +1
Notice that the first function (Func1) is a special case of this function because f(x) = g(x; -1, 5). You can include parameters in the FCMP functions that define the function and that find the roots. When you call the SOLVE function, the last arguments are a list of parameters (x, a, b) and you should give specific values to the a and b parameters and use a missing value to indicate that the x variable is the variable that you want to solve for. This is shown in the following program: 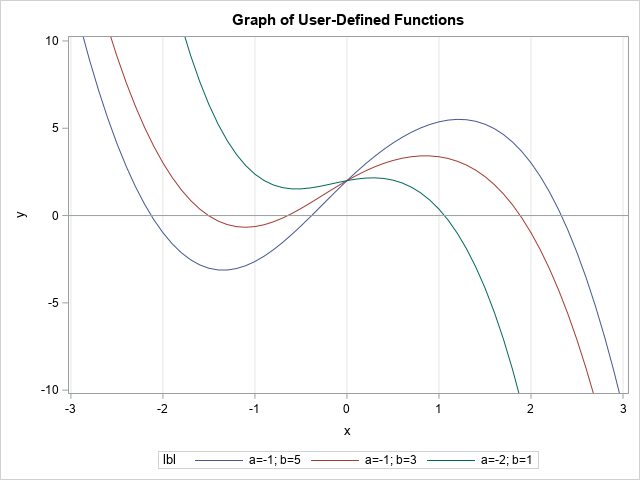 The three graphs are shown. You can see that two of the graphs have three roots, but the third graph has only one root. You can call the Root_Func2 function from the DATA step to find the roots for each function:

Notice that the initial guess x0 = 0 did not converge to a root for the function that has (a,b) = (-2, 1). It is well known that Newton-type methods do not always converge. This is in contrast to Brent's methods (used by the FROOT function in SAS/IML), which always converges to a root, if one exists.

The post Find the root of a function by using the SAS DATA step appeared first on The DO Loop.