In the paper "Tips and Techniques for Using the Random-Number Generators in SAS" (Sarle and Wicklin, 2018), I discussed an example that uses the new STREAMREWIND subroutine in Base SAS 9.4M5. As its name implies, the STREAMREWIND subroutine rewinds a random number stream, essentially resetting the stream to the beginning. I struggled to create a compelling example for the STREAMREWIND routine because using the subroutine "results in dependent streams of numbers" and because "it is usually not necessary in simulation studies" (p. 12). Regarding an application, I asserted that the subroutine "is convenient for testing."

But recently I was thinking about two-factor authentication and realized that I could use the STREAMREWIND subroutine to emulate generating a random token that changes every 30 seconds. I think it is a cool example, and it gives me the opportunity to revisit some of the newer features of random-number generation in SAS, including new generators and random number keys.

A brief overview of two-factor authentication

I am not an expert on two-factor authentication (TFA), but I use it to access my work computer, my bank accounts, and other sensitive accounts. The main idea behind TFA is that before you can access a secure account, you must authenticate yourself in two ways: 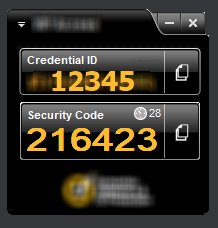 Most people use a smartphone as the physical device, but it can also be a PC or laptop. If you do an internet search for "two factor authentication tokens," you can find many images like the one on the right. This is the display from a software program that runs on a PC, laptop, or phone. The "Credential ID" field is a long string that is unique to each device. (For simplicity, I've replaced the long string with "12345.") The "Security Code" field displays a pseudorandom number that changes every 30 seconds. The Security Code depends on the device and on the time of day (within a 30-second interval). In the image, you can see a small clock and the number 28, which indicates that the Security Code will be valid for another 28 seconds before a new number is generated.

After you provide a valid username and password, the account challenges you to type in the current Security Code for your registered device. When you submit the Security Code, the remote server checks whether the code is valid for your device and for the current time of day. If so, you can access your account.

I love the fact that the Security Code is pseudorandom and yet verifiable. And it occurred to me that I can use the main idea of TFA to demonstrate some of the newer features in the SAS random number generators (RNGs).

Long-time SAS programmers know that each stream is determined by a random number seed. But a newer feature is that you can also set a "key" for a random number stream. For several of the new RNGs, streams that have the same seed but different keys are independent. You can use this fact to emulate the TFA app:

Using a key to change a random-number stream

Before worrying about using the time of day as the key value, let's look at a simpler program that returns the first pseudorandom number from independent streams that have the same seed but different key values. I will use PROC FCMP to write a function that can be called from the SAS DATA step. Within the DATA step, I set the seed value and use the "Threefry 2" (TF2) RNG. I then call the Rnd6Int function for six different key values. 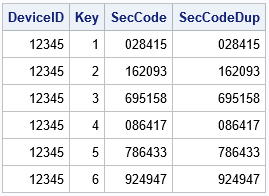 Using a time value as a key

The program below gets the "key" by looking at the current datetime value and rounding it to the nearest DT-second interval. This value (the RefTime variable) is sent to the Rnd6Int function to generate a pseudorandom Security Code. To demonstrate that the program generates a new Security Code every DT seconds, I call the Rnd6Int function 10 times, waiting 3 seconds between each call. The results are printed below: 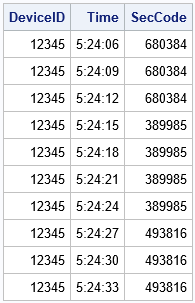 For TFA, every device has a unique Device ID. Because the Device ID is used to set the random number seed, the pseudorandom numbers that are generated on one device will be different than the numbers generated on another device. The following program uses the Device ID as the seed value for the RNG and the time of day for the key value. I wrapped a macro around the program and called it for three hypothetical values of the Device ID. 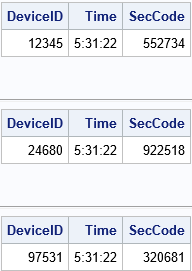 As expected, the program produces different Security Codes for different Device IDs, even though the time (key) value is the same.

In summary, you can use features of the SAS random number generators in SAS 9.4M5 to emulate the behavior of a TFA token generator. The SAS program in this article uses the Device ID as the "seed" and the time of day as a "key" to select an independent stream. (Round the time into a certain time interval.) For this application, you don't want the RAND function to advance the state of the RNG, so you can use the STREAMREWIND call to rewind the stream before each call. In this way, you can generate a pseudorandom Security Code that depends on the device and is valid for a certain length of time.

The post Rewinding random number streams: An application appeared first on The DO Loop.