Matrix balancing is an interesting problem that has a long history. Matrix balancing refers to adjusting the cells of a frequency table to match known values of the row and column sums. One of the early algorithms for matrix balancing is known as the RAS algorithm, but it is also called the raking algorithm in some fields. The presentation in this article is inspired by a paper by Carol Alderman (1992).

The problem: Only marginal totals are known 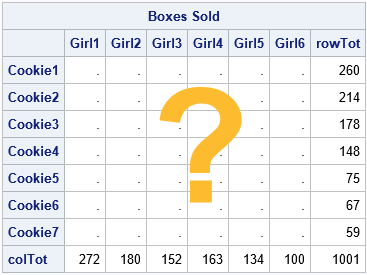 Guessing the cells of a matrix

Fortunately, often obtain a unique solution if we provide an informed guess for the cells in the table. Perhaps we can ask the girls to provide estimates of the number of boxes of each type that they sold. Or perhaps we have values for the cells from the previous year. In either case, if we can estimate the cell values, we can use a matrix balancing algorithm to adjust the cells so that they match the observed marginal totals.

Let's suppose that the troop leader asks the girls to estimate (from memory) how many boxes of each type they sold. The estimates are shown in the following SAS/IML program. The row and column sums of the estimates do not match the known marginal sums, but that's okay. The program uses subscript reduction operators to compute the marginal sums of the girls' estimates. These are displayed next to the actual totals, along with the differences. 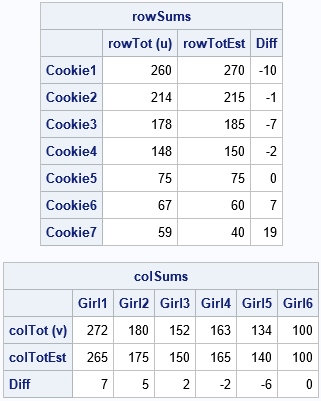 The RAS algorithm is implemented in the following SAS/IML program: 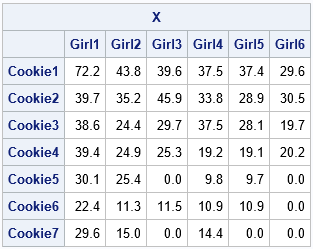 The matrix X has row and column sums that are close to the specified values. The matrix also preserves relationships among individual columns and rows, based on the girls' recollections of how many boxes they sold. The algorithm preserves zeros for the girls who claim they sold zero boxes of a certain type. It does not introduce any new zeros for cells.

This article looks at the RAS algorithm, which is one way to perform matrix balancing on a table that has nonnegative cells. "Balancing" refers to adjusting the interior cells of a matrix to match observed marginal totals. The RAS algorithm starts with an estimate, A. The estimate does not need to satisfy the marginal totals, but it should reflect relationships between the rows and columns that you want to preserve, such as relative proportions and zero cells. The RAS algorithm iteratively scales the rows and columns of A to create a new matrix that matches the observed row and column sums.

The RAS is not the only algorithm for matrix balancing, but it is the simplest. Another algorithm, called iterative proportional fitting (IPF), will be discussed in a second article.

The post Matrix balancing: Update matrix cells to match row and column sums appeared first on The DO Loop.