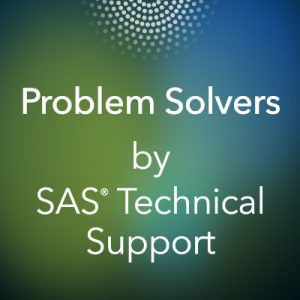 Many examples for performing analysis of covariance (ANCOVA) are available in statistical textbooks, conference papers, and blogs. One of the primary interests for researchers and statisticians is to obtain a graphical representation for the fitted ANCOVA model. This post, co-authored with my SAS Technical Support colleague Kathleen Kiernan, demonstrates how to obtain the statistical analysis for a quadratic ANCOVA model by using the GLM procedure and graphical representation by using the SGPLOT procedure.

For the purposes of this blog, the tests for equality of intercepts and slopes have been omitted. For more detailed information about performing analysis of covariance using SAS, see SAS Note 24177, Comparing parameters (slopes) from a model fit to two or more groups.

Keep in mind that the statistical methods for ANCOVA are similar whether you have a one-way ANCOVA model or a repeated-measures ANCOVA model. The example data below consists of three treatments, the covariate X and the response value Y. Predicted observations were generated based upon augmenting observations to the training data set that is used to fit the final model.

The following statements fit the final model with common slope in the direction of x and unequal quadratic slope in direction of X*X.

The Type III SS displays significance tests for the effects in the model.

You can write the parameter estimates to a data set by using the PARAMETERESTIMATES output object in an ODS OUTPUT statement in order to display the model equations on a graph. 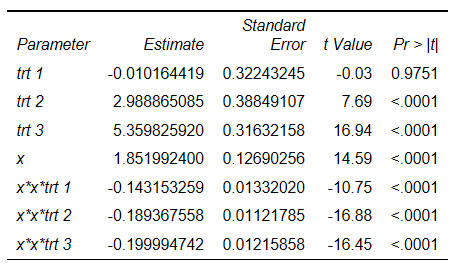 The default ODS graphics from PROC GLM provides the following graphic representation of the model: 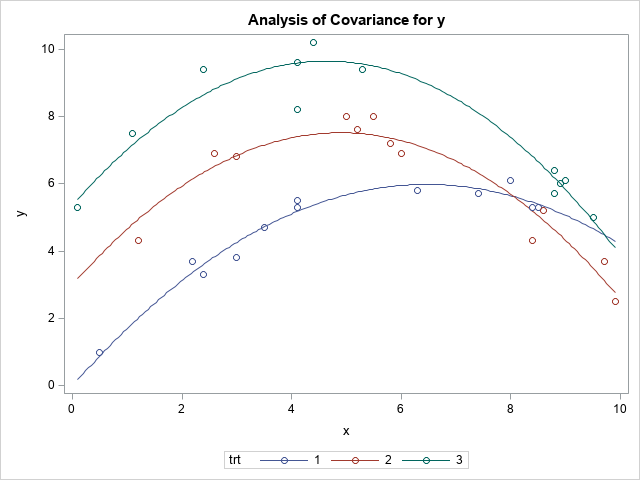 However, researchers, managers and statisticians often want to modify the graph to include the model equation, to change thickness of the lines, symbols, titles and so on.

You can use PROC SGPLOT to plot the ANCOVA model and regression equations by using the OUTPUT OUT=ANEW data set from PROC GLM, as shown in this example:

This code produces the following graph: 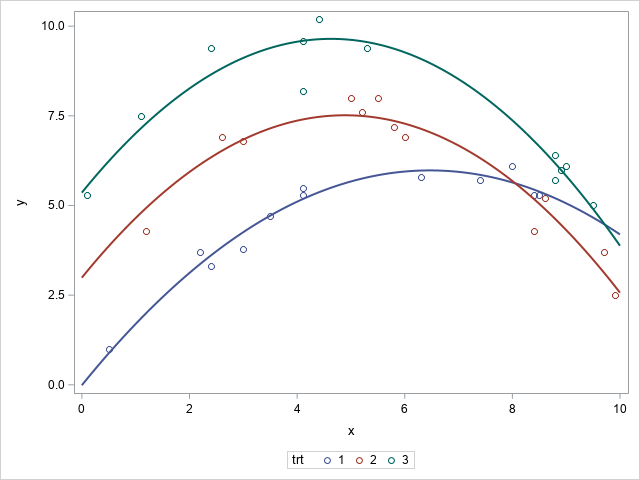 You can see that the respective graphs from PROC GLM and PROC SGPLOT look similar.

It is easier to use PROC SGPLOT to enhance graphs rather than to do the same by editing the ODS Graphics Template associated with the GLM procedure.

To color coordinate the respective treatments with the regression model equations and display them in the graph, you can use SG annotation. The TEXT function is used to place the text at specific locations within the graph.

The POLYGON and POLYCONT functions are used to draw a border around the equations. Note that you might need to adjust the values for X1 and Y1 in the annotate data set for your specific output.

This code results in the following graph with model equations: 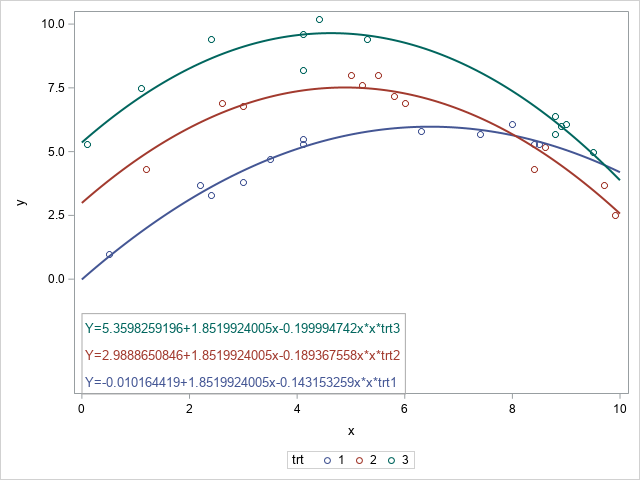 You might also want to add a title; change the X or Y-axis label; or change the color, thickness and pattern for the lines as well as the symbol for the data points, as follows:

The following PROC SGPLOT code produces a graph with the customizations described above:

Keep in mind that you also need to adjust the color for the annotated text by changing the value for the TEXTCOLOR= variable (in the DATA step) from textcolor="graphdata1:contrastcolor"  to reference the new colors, as shown in this example: textcolor="navy";

The resulting graph, including the modifications, is displayed below. 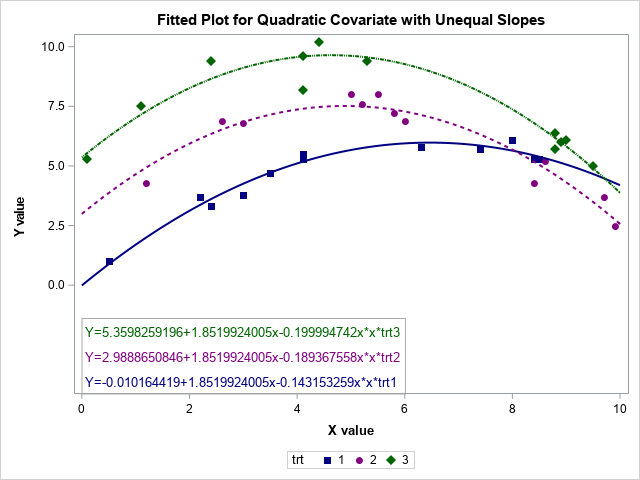 Using the output data set from your statistical procedure enables you to take advantage of the functionality of PROC SGPLOT to enhance your output.  This post describes just some of the customizations you can make to your output.

Using SAS® to analyze and visualize a quadratic ANCOVA model was published on SAS Users.