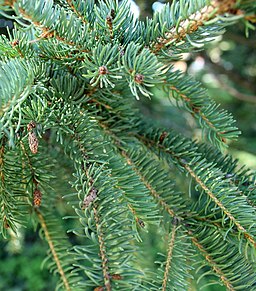 "O Christmas tree, O Christmas tree, how lovely are your branches!" The idealized image of a Christmas tree is a perfectly straight conical tree with lush branches and no bare spots. Although this ideal exists only on Christmas cards, forest researchers are always trying to develop trees that approach the ideal. And they use serious science and statistics to do it!

Bert Cregg, a forest researcher at Michigan State University, is a Christmas tree researcher who has been featured in Wired magazine. Cregg and his colleagues have published many papers on best practices for growing Christmas trees. One paper that caught my eye is Gooch, Nzokou, and Cregg (2009), "Effect of Indoor Exposure on the Cold Hardiness and Physiology of Containerized Christmas Trees." In this paper, Cregg and his colleagues investigate whether you can buy a live Christmas tree, keep it in the house for the holidays, and then transplant it in your yard. The authors use a statistical technique known as the median lethal dose, or LD50, to describe how bringing a potted Christmas tree into the house can affect its hardiness to freezing temperatures.

This blog post uses Cregg's data and shows how to use SAS to estimate the LD50 statistic. If you are not interested in the details, the last section of this article summarizes the results. Spoiler: An evergreen kept indoors has a reduced ability to withstand freezing temperatures after it is transplanted. In Cregg's experiment, all the transplanted trees died within six months.

The problem and the experiment

Containerized (potted) Christmas trees are popular among consumers who want a live Christmas tree but do not want to kill the tree by cutting it down. The idea is to bring the tree indoors during the holidays, then plant it on your property. However, there is a problem with bringing a tree into a house during the winter. Evergreens naturally go dormant in the winter, which enables their needles and buds to withstand freezing temperatures. When you bring a tree into a heated space, it "wakes up." If you later move the tree outside into freezing temperatures, the needles and buds can be damaged by the cold. This damage can kill the tree.

Cregg and his colleagues set up an experiment to understand how the length of time spent indoors affects a Christmas tree's ability to withstand freezing temperatures. Trees were brought indoors for 0, 3, 7, 14, and 20 days. Cuttings from the trees were then exposed to freezing conditions: -3, -6, -9, ..., -30 degrees Celsius. The goal is to estimate the median "lethal dose" for temperature. That is, to estimate the temperature at which half of the cuttings are damaged by the cold. In pharmacological terms, the time spent indoors is a treatment and the temperature is a "dose." The trees that were never brought indoors (0 days) are a control group.

Cregg and his colleagues studied three species of Christmas trees and studied dames to both buds and needles. For brevity, I will only look at the results for buds on the Black Hills Spruce (Picea glauca).

The data and the graphical method

In Table 1 (p. 75), the authors show data for the bud mortality and 50% lethality (LD50) for each treatment group (days indoors) as a function of decreasing temperatures. The data for the spruce are shown in the following SAS DATA step. Each cell in the table represents the percentage of 60 cuttings that showed damage after being exposed to a freezing temperature. By knowing there were 60 cuttings, you can compute how many cuttings were damaged. 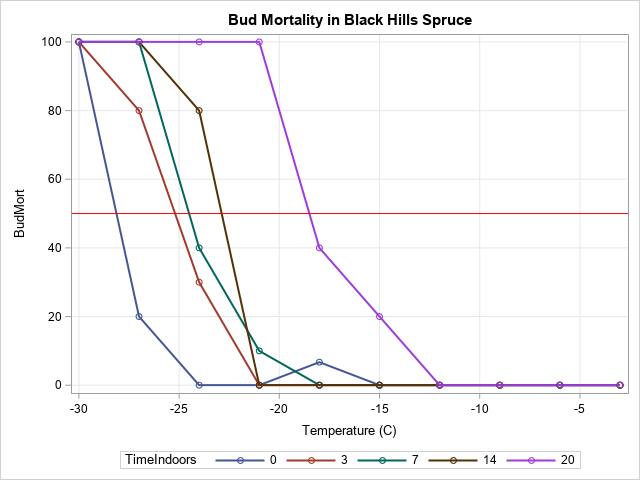 The horizontal red line in the graph is the line of 50% mortality. For each curve, a crude estimate of LD50 is the temperature at which the curve crosses that line. The graphical estimates and the estimates in the paper are shown in the following table. The estimates in the authors' paper are greater than the estimates from my graph, but I do not know why. If you use something other than linear interpolation (for example, a loess smoother), you will get different curves and different estimates. 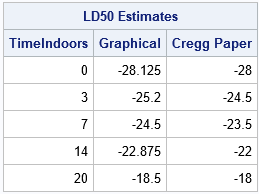 Although these graphical estimates differ slightly from the published results, the numbers tell the same story. On average, a spruce Christmas tree that is not brought indoors is hardy to about -28C. If you bring a tree indoors for 3 days, it is hardy only to about -25C. The longer a tree is indoors, the more it loses hardiness. For trees that are indoors for 20 days, the median lethal temperature is -18C, or about 10 degrees warmer than for the control group.

Fortunately, we can use statistics to address these concerns. The usual way to estimate LD50 in SAS is to use PROC PROBIT. For these data, we will perform a separate analysis for each value of the TimeIndoors variable. The INVERSECL option on the MODEL statement estimates the Temperature (and confidence limits) for a range of probability values. You can use the ODS OUTPUT statement to write the statistics to a SAS data set so that you can use PROC SGPLOT to overlay all five curves on a single graph, as follows: 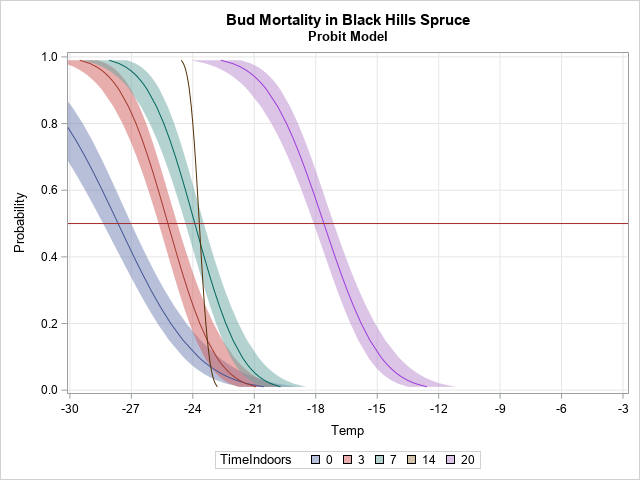 For each treatment group (time spent indoors), the graph shows probability curves for bud mortality as a function of the outdoor temperature. The median lethal temperature is where these curves and inverse confidence intervals intersect the line of 0.5 probability. (They are inverse confidence limits because they are for the value of the X value that produces a given Y value.) You can use PROC PRINT to display the estimates for LD50 for each treatment group:

The estimates for LD50 use all the data to model the bud mortality. This method also produces 95% (inverse) confidence limits for the LD50 parameter. For one of the treatment groups (TimeIndoors=14), the confidence limits could not be produced. The documentation for PROC PROBIT discusses why this can happen.

If you want, you can use this table to estimate the differences between the LD50 values.

If you are thinking about getting a containerized (live) Christmas tree, Cregg (2020) wrote an article about how to take care of it and how to prepare it for transplanting after Christmas. He suggests waiting until spring. In the 2009 experiment, 100% of the trees that had been brought indoors for 10 or more days died within six months of transplanting, as compared to 0% of the control group. This happened even though the outdoor temperature never approached the LD50 level. This experiment was done in Michigan, so the results might not apply to trees in warmer regions.

The post Can you transplant an indoor Christmas tree? appeared first on The DO Loop.