A previous article shows that for simple piecewise polynomial models, you can use the EFFECT statement in SAS regression procedures to use a spline to fit some segmented regression models. The method relies on two assumptions. First, it assumes that you know the location of the breakpoint. Second, it assumes that each model has the same parametric form on each interval. For example, the model might be piecewise constant, piecewise linear, or piecewise quadratic.

If you need to estimate the location of the breakpoint from the data, or if you are modeling the response differently on each segment, you cannot use a single spline effect. Instead, you need to use a SAS procedure such as PROC NLIN that enables you to specify the model on each segment and to estimate the breakpoint. For simplicity, this article shows how to estimate a model that is quadratic on the first segment and constant on the second segment. (This is called a plateau model.) The model also estimates the location of the breakpoint.

An example of a segmented model

A SAS customer recently asked about segmented models on the SAS Support Communities. Suppose that a surgeon wants to model how long it takes her to perform a certain procedure over time. When the surgeon first started performing the procedure, it took about 3 hours (180 minutes). As she refined her technique, that time decreased. The surgeon wants to predict how long this surgery now takes now, and she wants to estimate when the time reached its current plateau. The data are shown below and visualized in a scatter plot. The length of the procedure (in minutes) is recorded for 25 surgeries over a 16-month period. 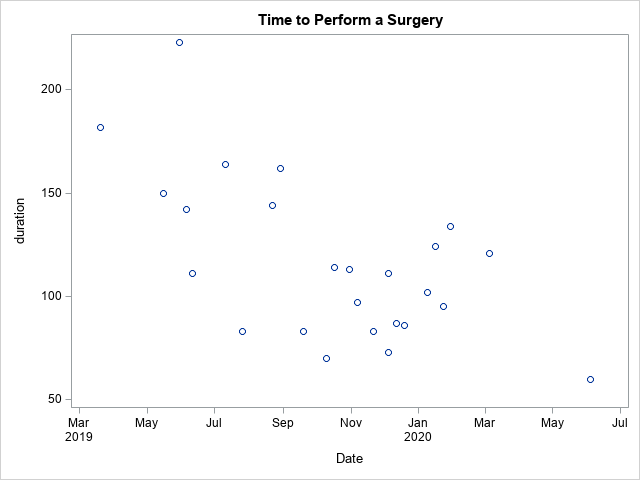 A segmented plateau model is one of the examples in the PROC NLIN documentation. The documentation shows how to use constraints in the problem to eliminate one or more parameters. For example, a common assumption is that the two segments are joined smoothly at the breakpoint location, x0. If f(x) is the predictive model to the left of the breakpoint and g(x) is the model to the right, then continuity dictates that f(x0) = g(x0) and smoothness dictates that f`(x0) = g`(x0). In many cases (such as when the models are low-degree polynomials), the two constraints enable you to reparameterize the models to eliminate two of the parameters.

The PROC NLIN documentation shows the details. Suppose f(x) is a quadratic function f(x) = α + β x + γ x2 and g(x) is a constant function g(x) = c. Then you can use the constraints to reparameterize the problem so that (α, β, γ) are free parameters, and the other two parameters are determined by the formulas:
x0 = -β / (2 γ)
c = α – β2 / (4 γ)
You can use the ESTIMATE statement in PROC NLIN to obtain estimates and standard error for the x0 and c parameters.

Provide initial guesses for the parameters

As is often the case, the hard part is to guess initial values for the parameters. You must supply an initial guess on the PARMS statement in PROC NLIN. One way to create a guess is to use a related "reduced model" to provide the estimates. For example, you can use PROC GLM to fit a global quadratic model to the data, as follows:

These parameter estimates are used in the next section to specify the initial parameter values for the segmented model.

Recall that a SAS date is represented by the number of days since 01JAN1960. Thus, for these data, the Date values are approximately 22,000. Numerically speaking, it is often better to use smaller numbers in a regression problem, so I will rescale the explanatory variable to be the number of days since the first surgery. You can use the parameter estimates from the quadratic model as the initial values for the segmented model:

The output from PROC NLIN includes estimates for the quadratic regression coefficients and for the breakpoint and the plateau value. According to the second table, the surgeon can now perform this surgical procedure in about 98 minutes, on average. The 95% confidence interval [77, 119] suggests that the surgeon might want to schedule two hours for this procedure so that she is not late for her next appointment.

According to the estimate for the breakpoint (x0), she achieved her plateau after about 287 days of practice. However, the confidence interval is quite large, so there is considerable uncertainty in this estimate.

The output from PROC NLIN includes a plot that overlays the predictions on the observed data. However, that graph is in terms of the number of days since the first surgery. If you want to return to the original scale, you can graph the predicted values versus the Date. You can also add reference lines that indicate the plateau value and the estimated breakpoint, as follows: 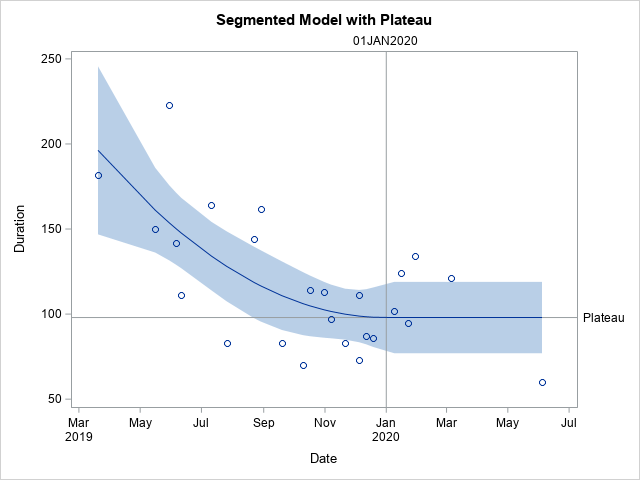 The graph shows the breakpoint estimate, which happens to be 01JAN2020. It also shows the variability in the data and the wide prediction limits.

The post Segmented regression models in SAS appeared first on The DO Loop.