I've previously written about how to generate all pairwise interactions for a regression model in SAS. For a model that contains continuous effects, the easiest way is to use the EFFECT statement in PROC GLMSELECT to generate second-degree "polynomial effects." However, a SAS programmer was running a simulation study and wanted to be able to generate all pairwise interaction effects within SAS/IML. One way to solve the programmer's problem is to use the HDIR function in SAS/IML. This article introduces the HDIR function and shows how to use it to generate pairwise (quadratic) interactions for continuous effects.

Before trying to solve a problem with a new tool, I like to use an existing method to solve the problem. Then I can compare the old and new answers and make sure they are the same.

For sample data, let's use the numerical variables in the Sashelp.Class data. So that the techniques are clearer, I will rename the variables to X1, X2, and X3. We want to generate all six pairwise interactions, including the "pure quadratic" terms where a variable interacts with itself. The names of the interaction effects will be X1_2, X1_X2, x1_X3, X2_2, X2_X3, and X3_2. The names with "_2" at the end are pure quadratic effects; the others are interactions.

One way to generate a design matrix that has all pairwise interactions is to use the EFFECT statement in PROC GLMSELECT. The interactions are written to the OUTDESIGN= data set. The columns of the design matrix have interpretable names, which are stored in the _GLSMOD macro variable.

Notice how PROC GLMSELECT handles the missing value in the third observation: because the X1 value is missing, the procedure puts a missing value into all interaction effects.

The horizontal direct product between matrices

The following simple example shows how the HDIR function works. The HDIR function returns a matrix whose columns are formed by elementwise multiplication of the columns of A and the matrix B. The first set of columns is the product A[,1]#B, the second set is A[,2]#B, and so forth. If A has k1 columns and B has k2 columns, then HDIR(A,B) has k1*k2 columns.

If you want to use the HDIR function to generate all pairwise interactions, you have a choice: You can generate ALL products of pairs and delete the redundant ones, or you can compute only the unique pairs. I will show the latter because it is more efficient. 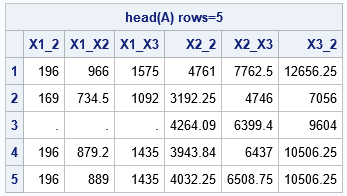 The HEAD module displays only the top five rows of the matrix of interactions. This output is almost the same as the output from PROC GLMSELECT. A difference is how missing values propagate. For the third row, X1 is missing. PROC GLMSELECT puts a missing value in all columns of the pairwise interactions. In contrast, the SAS/IML output only has missing values in the first three columns because those are the only columns that involve the X1 variable. If your data contain missing values, you might want to use the CompleteCases function to delete the rows that have missing values before performing additional analyses.

A function that computes interactions of continuous variables

The previous section computes all quadratic interactions for a matrix that has three variables. It is straightforward to generalize the idea to k variables. You simply compute the interactions HDIR(X[,i],X[,i:k]) for i=1,2,...,k. This is done in the following program. During the computation, it is convenient to also generate names for the interactions. The following program generates the same names as PROC GLMSELECT. To make the code easier to understand, I encapsulate the logic for names into a helper function called GetNamePairs. The helper function is called as part of the InteractPairs module, which returns both the matrix of interactions and the character vector that names the columns: 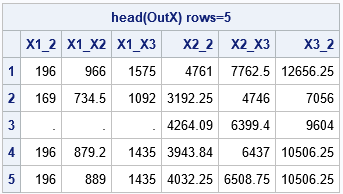 Technically, you don't need to use the HDIR function in the InteractPairs module. Instead, you can use the familiar '#' operator to perform the elementwise multiplication. However, if you try to generalize the module to handle the interaction between categorical variables and continuous variables, the HDIR function will be useful.

The post Generate all quadratic interactions in a regression model appeared first on The DO Loop.