This article briefly discusses wind chill calculations and presents a statistical formula for predicting wind chill temperatures. It then creates two wind chill charts by using the formula. The first chart (shown below; click to enlarge) is for US customary units (temperatures in Fahrenheit and wind speeds in miles per hour (mph)). A second chart is shown for SI units (temperatures in Celsius and wind speeds in kilometers per hour (kph)). The end of the article links to information about how scientists developed the wind chill chart. For readers who are interested in how the charts were made, I link to a SAS program. 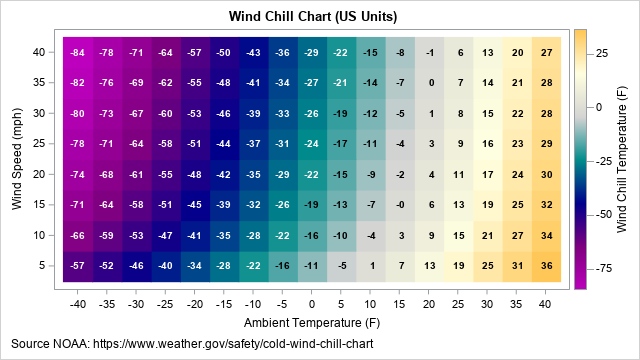 What is wind chill?

The wind chill table is based on sophisticated calculations of heat transfer from the human face in the presence of wind, which greatly increases the loss of heat due to convection. It is based on a lot of modeling assumptions (clear night, no sun, the human face is approximately a cylinder,...), and a lot of experimental data to estimate thermal properties of humans. The wind chill calculations that are used currently in the US, Canada, and the UK are based on a 2001 revision of an earlier wind chill table.

A formula for wind chill

The numbers in the official wind chill table are based on equations from physics and mathematical modeling. The equations are very complicated, and you cannot get the numbers in the table by using a simple formula. However, because a simple formula is very useful for understanding how the apparent temperature depends on wind speed, researchers constructed a linear regression model for which the apparent temperature (WCT) is regressed onto the air temperature and a power of the wind speed. The model includes the main effects and an interaction term.

Notice that the exponent for the wind speed is rather strange (0.16), but presumably this is based on either a statistical transformation (such as a Box-Cox transformation) or by fitting the exponent as a parameter in the model. Despite my efforts, I was unable to find details about how the regression formula was fitted.

A little known fact is that the wind speeds in the formula are measured at 10 meters (standard anemometer height). The formula uses a wind-profile model to adjust the wind speed to approximate the speed at the height of an average person.

Visualizing wind chill for a given air temperature

Winds removes heat from a layer next to your skin. If you specify the air temperature but allow the wind speed to vary, a graph of the wind chill temperature (WTC) shows how much colder it feels based on the speed of the wind. The following graph shows the WTC (in US units) for four sub-freezing air temperatures: 30°, 20°, 10°, and 0° F. 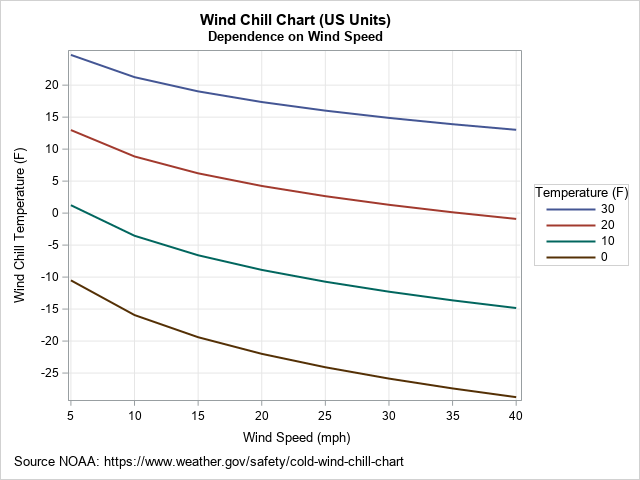 Creating a wind chill chart in US units

You can create a similar chart for SI (metric) units, as shown below. Because the Celsius degree is almost twice as large as the Fahrenheit degree, I used increments of 3° C along the horizontal axis. However, I continue to use 5 as an increment for wind speed, even though 5 kph is only about 3 mph. The ranges for the axes are chosen so that the range of temperatures and wind speeds are approximately the same as for the US chart. 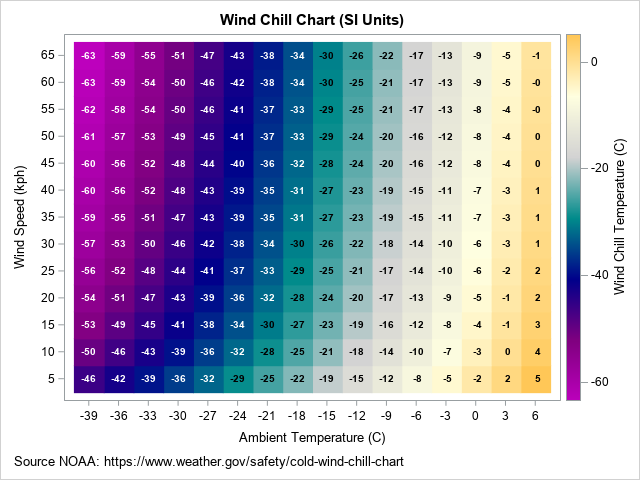 The history of wind chill computations is fascinating. The Wikipedia article for "Wind Chill" has a few sentences about the history. For an interesting account of the development of the most recent wind chill chart (2001), I highly recommend reading Osczevski and Bluestein, "The New Wind Chill Equivalent Temperature Chart," 2005. They explain some of the complications and approximations used to construct the chart. They note that "the public seems to have a strong preference for the equivalent temperature" chart, which seems simple but hides a lot of complexity. They conclude that the chart is "a deceptive simplification" that only seems to be easy to understand.

A future article will discuss how I constructed the wind chill charts in SAS. You can download the complete SAS program that creates these graphs.

The post The wind chill chart appeared first on The DO Loop.