Before discussing quantile regression, let's recall what we mean by a conditional and marginal distribution. The following SAS DATA step simulates 250 observations in a regression model where the response variable (Y) depends on an explanatory variable (X) and random noise. A scatter plot shows the data and overlays three sets of reference lines that will be used later in this article. 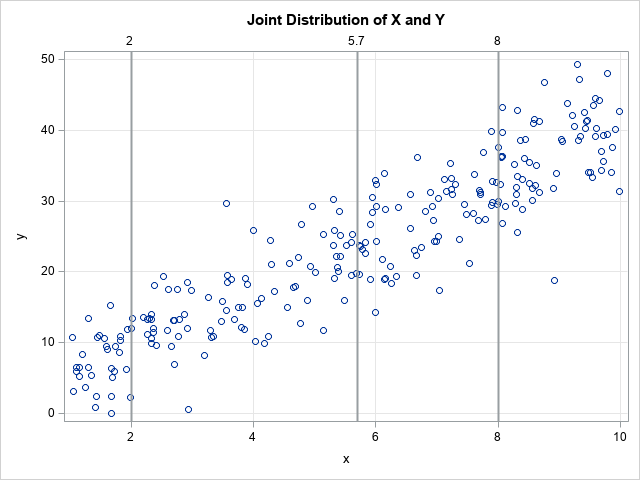 The graph overlays three sets of drop lines to guide the discussion of conditional distributions. The following are visual estimates:

Empirical estimates for the marginal and conditional distributions 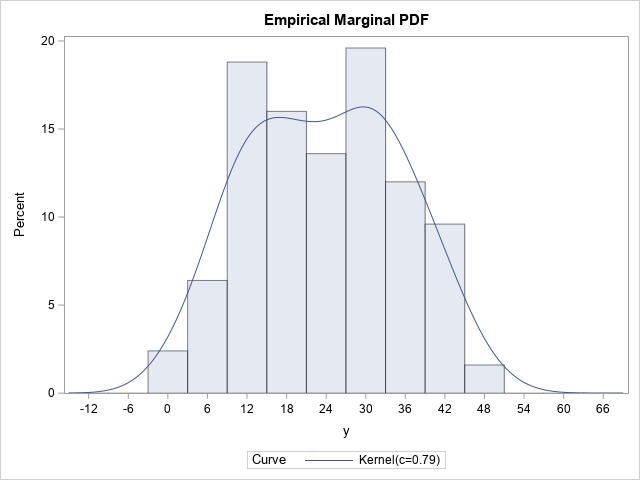 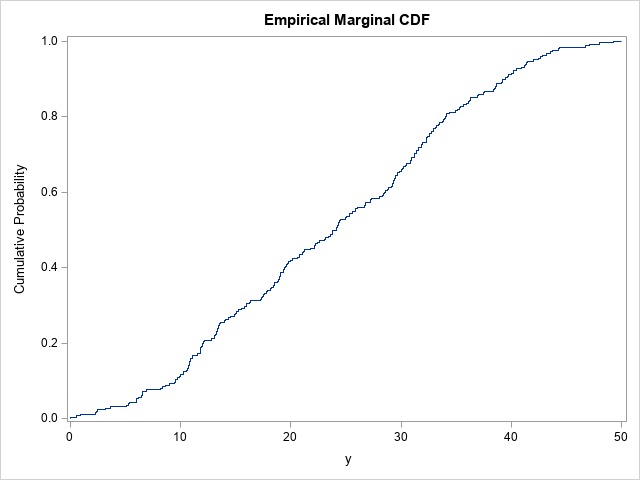 It is more difficult to estimate the conditional distribution of Y at some value of X. For definiteness, suppose we want to estimate the conditional distribution of Y at the mean of X, which is X=5.7. The simplest estimate is to choose all observations that are close to 5.7. There is no precise definition for "close to." In the following procedure, the WHERE clause limits the data to observations for which X is within 0.5 units of 5.7. I call this the "poor man's" estimation procedure because it doesn't use any analytics. As shown in the next section, quantile regression provides a more elegant estimate. 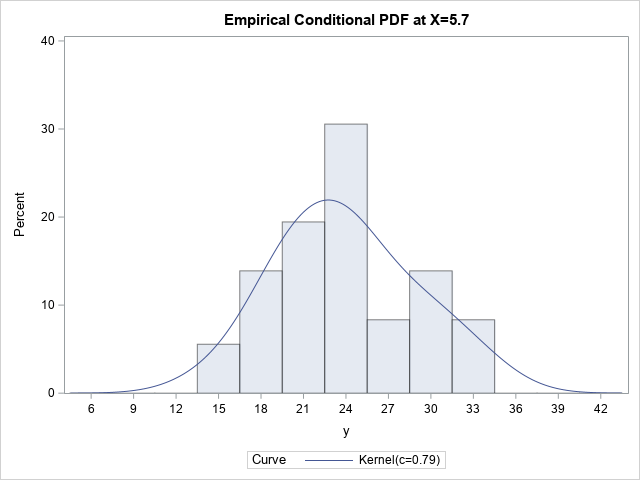 Only the PDF is shown because it is easier to interpret. According to the "poor man's" estimate, the conditional distribution at X=5.7 looks approximately normal but perhaps with some positive skewness. The peak is near Y=23 and it looks like the ±3σ range is [13, 36]. These values are very close to the estimates that we guessed based on the scatter plot in the previous section.

Compare the conditional and marginal distributions

I used the OUTKERNEL= option to output the kernel density estimates to SAS data sets. To compare the marginal and conditional distributions, you can combine those data sets and overlay the estimates on a single graph, as follows: 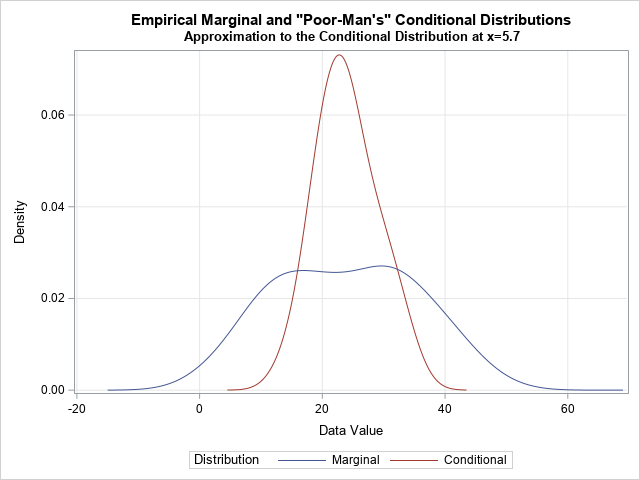 To obtain this graph, I ran PROC UNIVARIATE twice, merged the outputs, and called PROC SGPLOT to overlay the curves. By using the CONDDIST statement in PROC QUANTREG, you can create a similar graph with one line of SAS code.

Estimate the conditional distribution at the mean of the explanatory variables 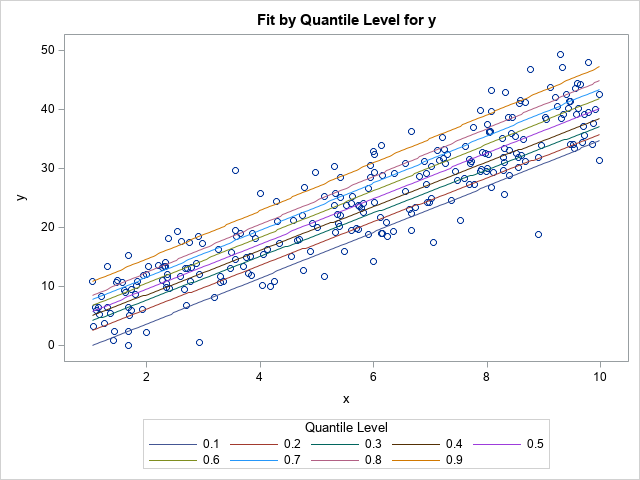 The graph shows the nine quantile models. If you draw a vertical line at any X value (such as X=5.7) the places where the vertical line crosses the regression curves are the conditional quantiles for Y at X. You can think about plotting those Y values against the quantile values (0.1, 0.2, ..., 0.9) to obtain a model-based cumulative distribution curve. 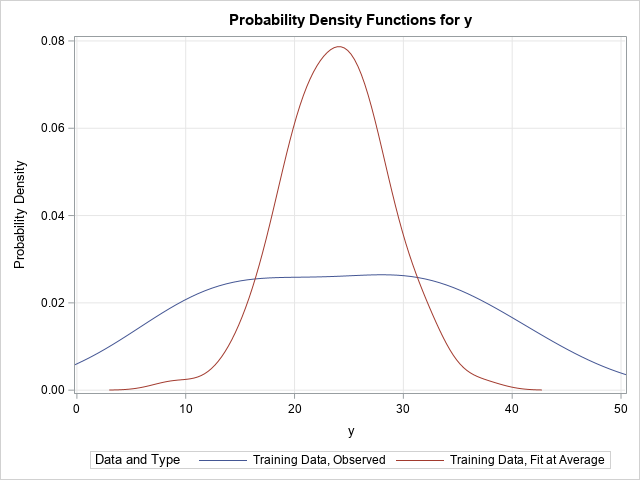 The CONDDIST statement creates two plots, but only the PDF plot is shown here. Notice the similarity to the earlier graph that compared the kernel density estimates from PROC UNIVARIATE. In both graphs, the blue curve represents the marginal density estimate for Y. The red curve estimates the conditional density at X=5.7. In the previous graph, the estimate was crude and was obtained by throwing out a lot of the data and using only observations near X=5.7. In the current graph, the model-based estimate is formed by using all the data and by fitting 100 different quantile regression models. In both graphs, the conditional PDF has a peak near Y=23, is approximately normal, and the bulk of the density is supported on [13, 36].

Estimate the conditional distribution at a data value 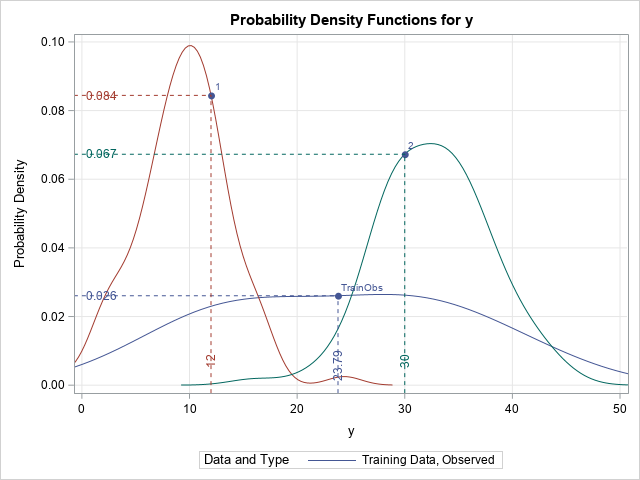 Again, the marginal distribution of Y is overlaid as a comparison. To help interpret the curves, PROC QUANTSELECT adds drop lines to the graph (by default). The vertical drop line specifies the Y value for the observation (or the mean of the Ys for the marginal density, which is shown in blue).

Why is this useful?

And although I have presented an example with only one continuous variable, you can do the same thing for models that contain multiple explanatory variables, both continuous and CLASS variables.

I have left out a lot of details, but I hope I have whetted your appetite to learn more about the CONDDIST statement in PROC QUANTREG. The documentation for the QUANTREG procedure has additional information and additional examples. It also shows how you can fit the regression on one set of data (the training data) and apply the models to estimate "counterfactual" distributions for new data (the test data).

The post The conditional distribution of a response variable appeared first on The DO Loop.