It can be frustrating to receive an error message from statistical software. In the early days of the SAS statistical graphics (SG) procedures, an error message that I dreaded was
ERROR: Attempting to overlay incompatible plot or chart types.
This error message appears when you attempt to use PROC SGPLOT to overlay two plots that have different properties. For example, you might be trying to overlay a bar chart, which requires a categorical variable, with a scatter plot or series plot, which often displays values of a continuous variable.

In SAS 9.4M3 and later, there is a simple way to avoid this error message. You can combine a bar chart with other plot types by using the VBARBASIC or HBARBASIC statements, which create a bar chart that is compatible with other "basic" plots.

The SAS documentation includes an explanation of chart types, and a table that shows which plots you can overlay when you use PROC SGPLOT or PROC SGPANEL. (The doc erroneously puts HBARBASIC and VBARBASIC in the "categorization" group, but they should be in the "basic group." I have contacted the doc writer to correct the mistake.) If you try to overlay plots from different chart types, you will get the dreaded ERROR: Attempting to overlay incompatible plot or chart types.

First, let me emphasize that this error message only appears when you use PROC SGPLOT or SGPANEL to overlay the plots. If you use the Graph Template Language (GTL) and PROC SGRENDER, you do not have this restriction.

I have previously written about two important cases for which it is necessary to overlay an empirical distribution (bar chart or histogram) and a theoretical distribution, which is visualized by using a scatter plot or series plot:

Overlay a bar chart and a line plot

Suppose you want to use a bar chart to display the average height (by age) of a sample of school children. You also want to add a line that shows the average heights in the population. Because you must use "compatible" plot types, the traditional approach is to combine the HBAR and HLINE statements, as follows. (For simplicity, I omit the legend on this graph.) The DATA step creates fake data, which are supposed to represent the national average and a range of values for the average heights. 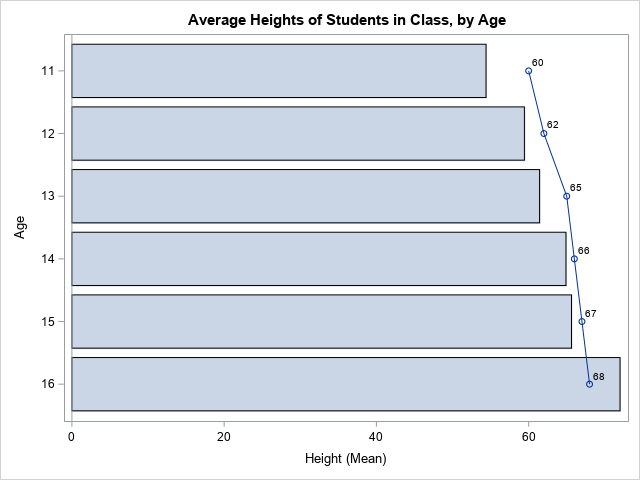 This is the "classic" bar chart and line plot. This syntax has been available in SAS since at least SAS 9.2. It enables you to combine multiple statements for discrete variables, such as HBAR/VBAR, HLINE/VLINE, and DOT. However, in some situations, you might need to overlay a bar chart and more complicated plots. In those situations, use the HBARBASIC or VBARBASIC graphs, as shown in the next section.

Overlay a bar chart and plots of continuous data

Suppose you want to combine a bar chart, a series plot, and a high-low plot. You can't use the VBAR or HBAR statements because that leads to "incompatible plot or chart types." However, you can use the VBARBASIC and HBARBASIC statements, as follows: 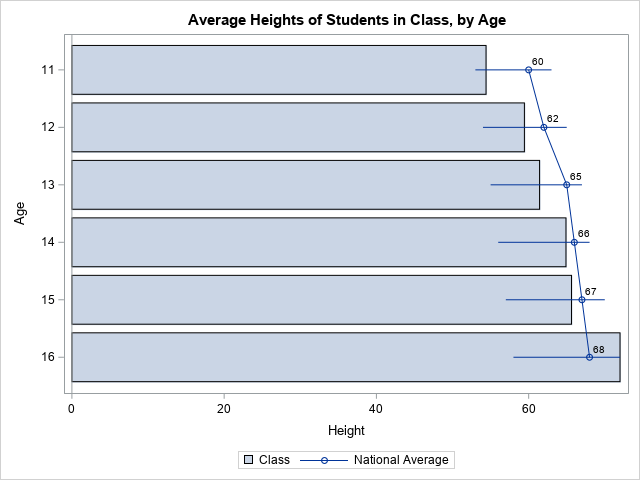 Notice that the SERIES and HIGHLOW statements create "basic" graphs. To overlay these on a bar chart, use the HBARBASIC statement. In a similar way, you can overlay many other graph types on a bar chart.

Sometimes you need to overlay a bar chart and another type of graph. If you aren't careful, you might get the error message: ERROR: Attempting to overlay incompatible plot or chart types. In SAS 9.4M3 and later, there is a simple way to avoid this error message. You can use the VBARBASIC or HBARBASIC statements to create a "basic" bar chart that is compatible with other "basic" plots.

The post Overlay other graphs on a bar chart with PROC SGPLOT appeared first on The DO Loop.