Ranking is a fundamental concept in statistics. Ranks of univariate data are used by statisticians to estimate statistics such as percentiles (quantiles) and empirical distributions. A more advanced use is to compute various rank-based measures of correlation or association between pairs of variables. For example, ranks are used to compute the Spearman rank correlation.

A formula for a bivariate rank 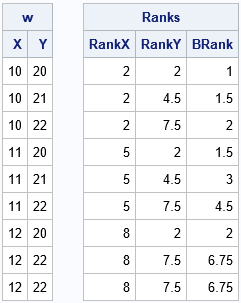 The first two columns are univariate tied ranks of the X and Y coordinates. This third column is the bivariate ranking of the pairs of points. If you think about plotting the points on a scatter plot, points that are in the lower-left corner of the plot have the lowest ranks, and points in the upper-right corner have the higher ranks.

A visualization of bivariate ranks 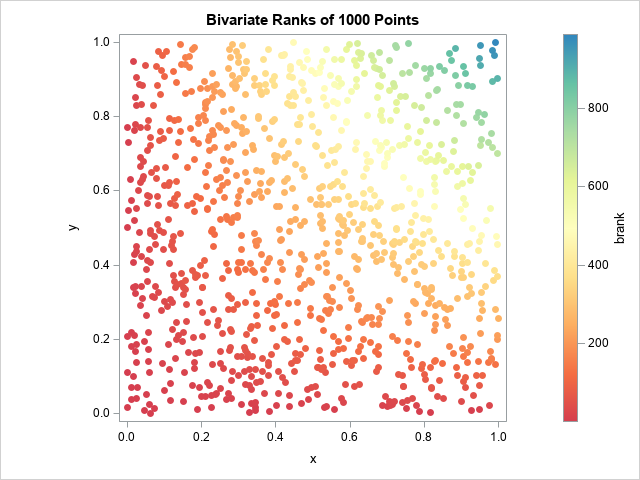 Notice that the ranks are not uniformly distributed among the 1000 points. That is because there are many tied ranks for the lower ranks. For example, about 50% of the points have ranks less than 200. Only 10% have ranks greater than 600.

A connection with bivariate CDF

As I indicated earlier, the formula for the bivariate ranks is reminiscent of the definition of a bivariate CDF. In retrospect, I should not have been surprised to see that coloring the observations by their bivariate rank looks a lot like a two-dimensional CDF. For example, the following graph shows the CDF for the bivariate normal distribution:

This article discusses the concept of a bivariate rank for ordered pairs. In a bivariate rank, both the X and Y coordinate are used to assign a rank. The formula that computes the bivariate rank is not complicated, but I did not initially understand how it assigns ranks to points in a scatter plot. As usual, a visualization helps. The visualization shows that bivariate ranks are conceptually similar to the computation of a two-dimensional CDF.

The post Compute bivariate ranks appeared first on The DO Loop.