This article shows a series of examples where Hoeffding's D is compared with the Pearson correlation. You can use these examples to build intuition about how the D statistic performs on real and simulated data.

For many examples, the Hoeffding D association between two variables is between 0 and 1. However, occasionally you might see a negative value for Hoeffding's D, especially if there are many duplicate values in the data.

Let's compare the Pearson correlation and the Hoeffding D statistic on some real data. The following call to PROC SGSCATTER creates bivariate scatter plots for five variables in the Sashelp.Cars data set: 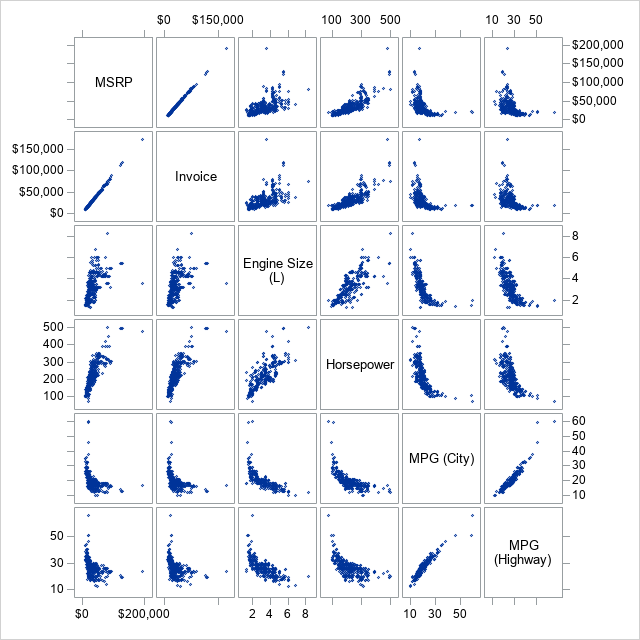 The graph shows relationships between pairs of variables. Some pairs (MSRP and Invoice) are highly linearly related. Other pairs (MPG_City versus other variables) appear to be related in a nonlinear manner. Some pairs are positively correlated whereas others are negatively correlated.

Let's use PROC CORR in SAS to compare the matrix of Pearson correlations and the matrix of Hoeffding's D statistics for these pairs of variables. The NOMISS option excludes any observations that have a missing value in any of the specified variables: 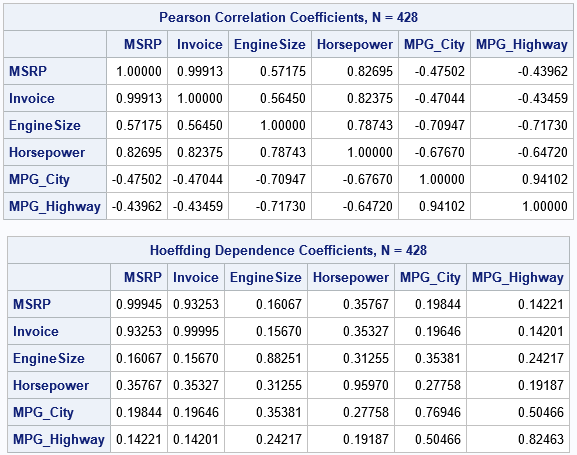 There are a few noteworthy differences between the tables:

A classic example in probability theory shows that correlation and dependence are different concepts. If X is a random variable and Y=X2, then X and Y are not independent, even though their Pearson correlation is 0. The following example shows that the Hoeffding statistic is nonzero, which indicates dependence between X and Y: 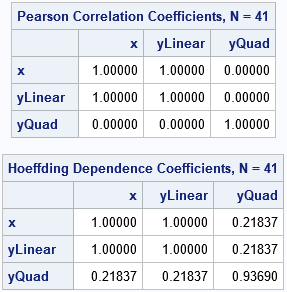 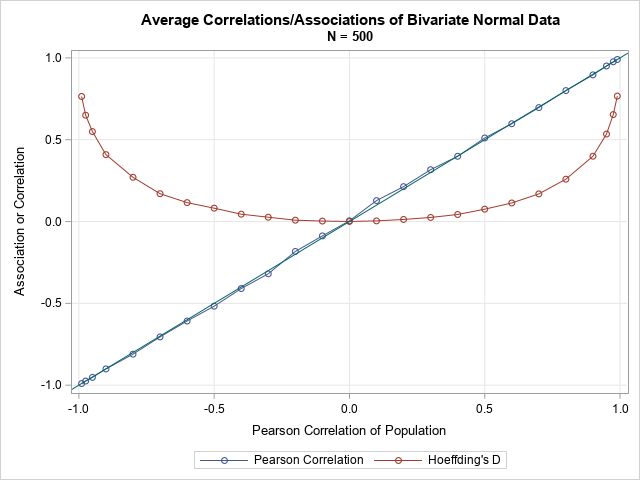 For these bivariate normal samples (of size 500), the Monte Carlo means for the Pearson correlations are very close to the diagonal line, which represented the expected value of the correlation. For the same data, the Hoeffding D statistics are different. For correlations in [-0.3, 0.3], the mean of the D statistic is positive and is very close to 0. Nevertheless, the p-values for the Hoeffding test of independence account for the shape of the curve. For bivariate normal data that has a small correlation (say, 0.1), the Pearson test for zero correlation and the Hoeffding test for independence often both accept or both reject their null hypotheses.

I doubt Hoeffding's D statistic will ever be as popular as Pearson's correlation, but you can use it to detect nonlinear dependencies between pairs of variables.

The post Examples of using the Hoeffding D statistic appeared first on The DO Loop.