Odani's truism is a mathematical result that says that if you want to compare the fractions a/b and c/d, it often is sufficient to compare the sums (a+d) and (b+c) rather than the products a*d and b*c. (All of the integers a, b, c, and d are positive.) If you compare the products, you will know the correct answer 100% of the time because a/b < c/d if and only if a*d < b*c. However, K. Odani proved (1998) that the expression (a+d) < (b+c) is true 91% of the time when the integers a, b, c, and d are chosen uniformly at random in the interval [1,N], where N is a very large integer. A previous article shows a Monte Carlo simulation that demonstrates Odani's truism.

As discussed at the end of the previous article, the 91% probability includes many fractions that are easy to compare in your head, such as 6/29 versus 35/18, and 1/6 versus 5/8. Odani's result also includes unreduced fractions such as 2/4 and 3/6. What is the probability that comparing the sums gives the correct answer if you consider only reduced fractions a/b and c/d in the interval [0,1] where the fractions are close to each other? That is the subject of this article. Briefly, this article examines whether Odani's truism has any value in practice.

First attempt: Fractions that are adjacent in the Farey seqence

The following SAS/IML function computes the Farey sequence for any order n:

You can call the function generate the Farey sequence for n=100. Let's print out a few fractions in the sequence along with an indicator variable that shows whether their Odani sums are negative:

The Farey sequence of order 100 has 3,045 elements. The table shows the values for the elements near the fraction 2/15, which is the 407th element in the sequences. The program compares the i_th fraction to the (i+1)st fraction and computes whether (a+d) < (b+c) for the adjacent pairs. For the 14 comparisons in this example, the Odani truism was true for seven and false for the other seven.

A 50% success rate is not very good! Maybe fractions near 2/15 are "unusual" in some way? Let's compare all adjacent pairs of fractions in the Farey(100) sequence and compute the proportion that satisfies Odani's truism. We can also plot the truth or falsity of Odani's truism for each fraction in the Farey sequence: 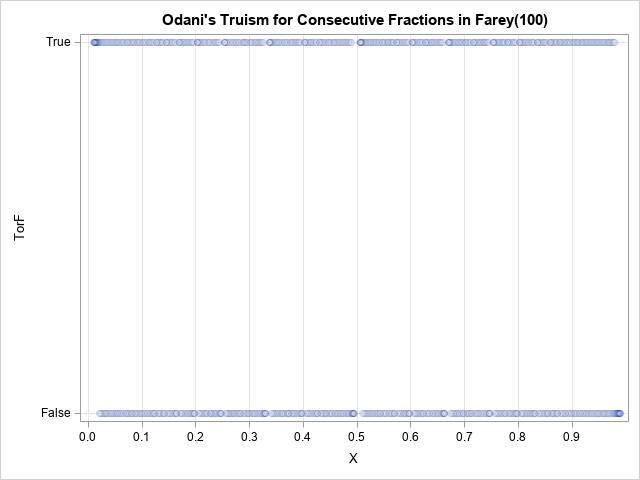 Notice that this result does not violate Odani's theorem because we are comparing only certain fractions: reduced fractions in [0,1] that are adjacent to each other in the Farey sequence.

Compare fractions that are k terms away in the Farey seqence

Let L be the length of the Farey sequence. The following function compares each term in the Farey sequence with the next k terms in the sequence, when possible. For the first L-k terms, you can compare each term with the k terms that follow. For the last k terms, you can only compare to the end of the sequence. Thus, there are a total of k*(L-k) + k*(k-1)/2 comparisons. If you count the number of pairs that satisfy Odani's truism and divide by the total number of comparisons, you get the proportion of comparisons for which Odani's sum accurately predicts whether one fraction is smaller than another: 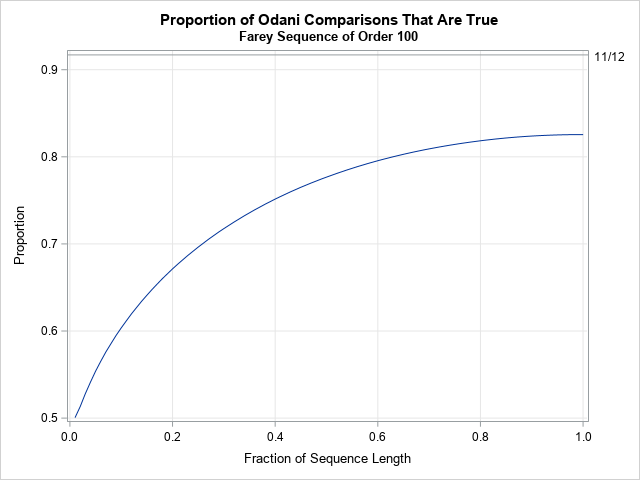 A similar curve is seen when you consider larger sets of fractions. For example, for the Farey sequence of order 500 (which contains the 76,117 fractions whose denominators are less than or equal to 500), the graph looks similar except it is slightly higher: when you compare all fractions, Odani's truism is valid 83.2% of the time. As you consider larger Farey sequences, the proportion of comparisons for which Odani's truism increases very slowly. For the Farey sequence of order 1000, which has 304,193 terms, Odani's truism is valid 83.3% of the time when you perform all pairwise comparisons. Warning: Performing all pairwise comparisons for the Farey(1000) sequence is expensive! It takes about 30 minutes when using the program in this article to compare the 46 billion pairs of fractions. It is interesting that 83.3% ≈ 5/6.

The post Odani's truism for fractions that are near each other appeared first on The DO Loop.