When data contain outliers, medians estimate the center of the data better than means do. In general, robust estimates of location and sale are preferred over classical moment-based estimates when the data contain outliers or are from a heavy-tailed distribution. Thus, instead of using the mean and standard deviation of data, some analysts prefer to use robust statistics such as the median, the trimmed mean, the interquartile range, and the median absolute deviation (MAD) statistic.

A SAS statistical programmer recently wanted to use "rolling" robust statistics to analyze a time series. The most familiar rolling statistic is the moving average, which is available in PROC EXPAND in SAS/ETS software. In addition to rolling weighted means, the EXPAND procedure supports a rolling median, which is shown in the next section. However, it does not compute a robust rolling estimate of scale, such as a rolling MAD statistic. However, you can use PROC IML to compute robust estimates.

This article discusses how to compute robust rolling statistics for a time series. A subsequent article will discuss the rolling MAD statistic, which enables you to identify outliers in a time series.

An example of a rolling median

The following example shows how to compute a running median in SAS. The data (from Velleman and Hoaglin, 1981, p. 161ff) are the daily temperature of a cow (measured by counting chirps from a telemetric thermometer). Peak temperatures are associated with fertility, so dairy farmers want to estimate the peaks of the time series to predict the best time to impregnate the cows. One simple technique is to compute the rolling median. Although a farmer would probably use a rolling window that looks back in time (such as the median of the last seven days), this example uses a seven-day centered time window to compute the rolling median: 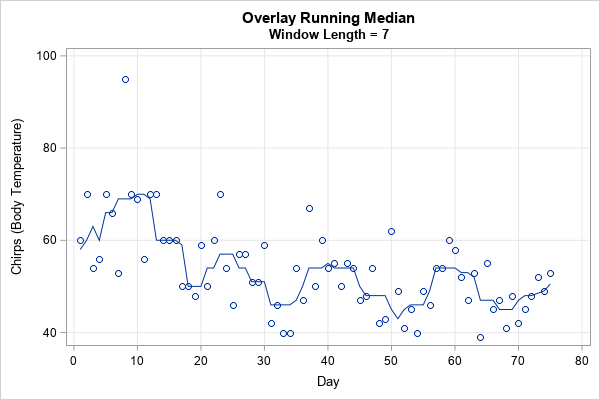 I previously showed how to implement rolling statistics in the SAS/IML language. The typical technique is to

If you want to compute several statistics on the same data, it can be advantageous to form a matrix that contains the data in each window. If the time series contains n observations, and each window contains L data values, then you can form the L x n matrix whose columns contain the data in the windows. You can then compute multiple statistics (means, standard deviations, medians, MADs, ....) on the columns of the matrix. For centered windows, you must decide what data to use for the first few and last few data points in the series. Two popular choices are to use missing values or to repeat the first and last points. I use the term Tukey padding to indicate that a series has been padded by repeating the first and last values.

Extract data for each window

This section shows one way to extract the data in the n windows. The following SAS/IML function pads the time series by using a user-defined value (usually a missing value) or by using Tukey padding. It then forms the (2*k+1) x n matrix whose i_th column is the window of radius k about the point y[i]: 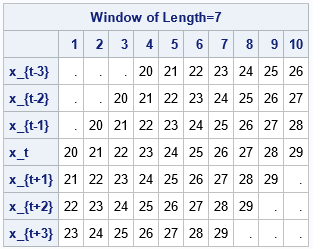 The columns of the tables show the windows for the sequence of size n=10. The windows have radius k=3 (or length 2*k+1=7), which means that the centered window at y[t]includes the points
y[t-3], y[t-2], y[t-1], y[t], y[t+1], y[t+2], and y[t+3].
Complete windows are available for t=4, 5, 6, and 7. Near the ends of the sequence (when t ≤ k or t > n-k), you must decide what data values to use in the windows. In this example, I padded the sequence with missing values. Thus, the windows about the first and last data points contain only four (not seven) data points. An alternative is to use Tukey's padding (recommended by Velleman and Hoaglin, 1981, p. 161), which pads the sequence on the left by repeating y[1] and pads the sequence on the right by repeating y[n]. Tukey's padding is the default method, so you can get Tukey's padding by calling the function as follows:

Apply a moving statistic to each window 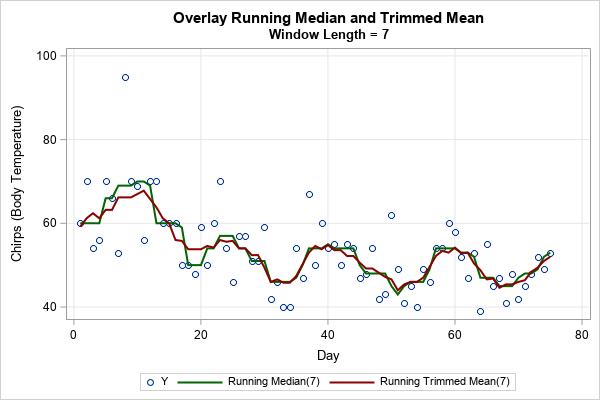 The graph overlays two rolling robust statistics on the cow's temperature for each day. The rolling median is the same as is produced by PROC EXPAND except for the first and last k observations. (PROC EXPAND uses missing-value padding; the SAS/IML example uses Tukey padding.) The rolling trimmed mean is a different robust statistic, but both methods predict the same peaks for the cow's temperature.

A rolling median is a robust statistic that can be used to smooth a time series that might have outliers. PROC EXPAND in SAS/ETS software supports the rolling median. However, you can also use SAS/IML to construct various rolling statistics.

This article shows how to use PROC IML to construct a matrix whose columns are moving windows. You can choose from two different ways to populate the windows at the beginning and end of the series. After you compute the matrix, you can apply many classical or robust statistics to the columns of the matrix. This gives you a lot of flexibility if you want to construct robust rolling statistics that are not supported by PROC EXPAND. This article shows an example of a trimmed mean. A future article will discuss using the MAD statistic to identify outliers in a time series.

The post The running median as a time series smoother appeared first on The DO Loop.