It is well known that classical estimates of location and scale (for example, the mean and standard deviation) are influenced by outliers. In the 1960s, '70s, and '80s, researchers such as Tukey, Huber, Hampel, and Rousseeuw advocated analyzing data by using robust statistical estimates such as the median and the median absolute deviation (MAD) from the median. A common theme in this research was to use robust estimates to identify and exclude outliers. If you are not familiar with the MAD statistic, see the Appendix at the end of this article for an overview and references.

This article discusses an outlier-detection method in time series analysis called the Hampel identifier. It uses robust moving estimates to identify outliers in a time series. If the method identifies an outlier, you might decide to replace the extreme value with an imputed value, such as the rolling median at that time point. This kind of imputation is known as the Hampel filter.

Suppose you have a time series that might have outliers in it. A simple method to detect outliers is to estimate the rolling center of the time series by fitting a smooth curve to the series. You can then classify an observation as an outlier if it is sufficiently far away from the curve. For example, you might classify an outlier as a point, y[t], such that |y[t]- mean[t]| > 3*std[t], where mean[t]is the moving average at t (using some window length) and std[t]is the moving standard deviation.

Unfortunately, the classical moving average and moving standard deviation are influenced by the outliers. Consequently, you might not be able to detect the outliers if you use a moving average as the smoother and use a moving standard deviation to determine "far away." The following example shows how classical estimates can fail to detect outliers. In the example, most observations are on a sine curve except for four outliers that are artificially set to 5, which is far from the sine curve. The examples use PROC EXPAND in SAS/ETS and windows of length 7 to compute a running mean and a running standard deviation: 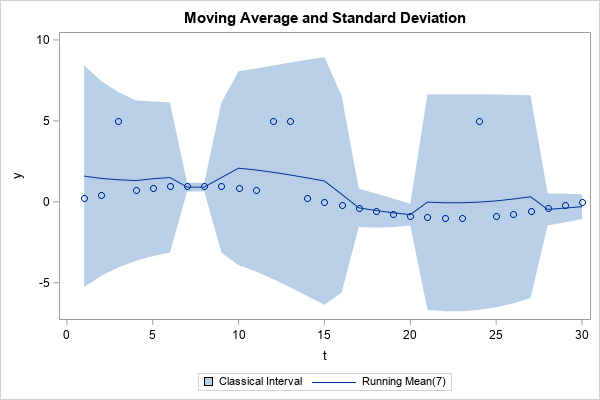 If you replace the moving average and moving standard deviation with their robust counterparts (median and MAD), you obtain the Hampel identifier. Hampel suggested that observations that lie outside the moving interval median[t]± h*(1.4826*MAD[t]) be considered outliers. Most practitioners use h=3, but you can use higher values to identify more extreme outliers. The factor 1.4826 is explained in the Appendix to this article. It is chosen so that 1.4826*MAD estimates the standard deviation of normally distributed data.

A previous article shows how to use SAS/IML to compute the points in moving windows of a time series. That article defines the extractWindows function, which returns a matrix whose columns are the data in each moving window. The MAD function in SAS/IML computes the MAD of each column, so you can easily form the Hampel intervals and test which observations are outside of the intervals.

The following SAS/IML program reads the Test data and applies the Hampel identifier. The vector Outlier is a binary indicator variable; the value is 1 for observations that are outside of the robust Hampel intervals: 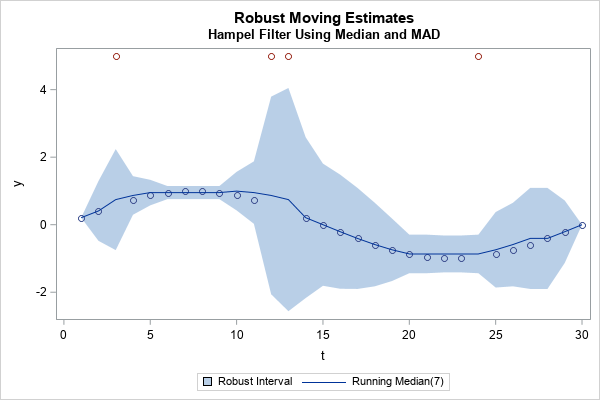 Unlike the classical method, the robust Hampel identifier successfully flags all four unusual observations. Notice two features of the graph:

The Hampel identifier for real data 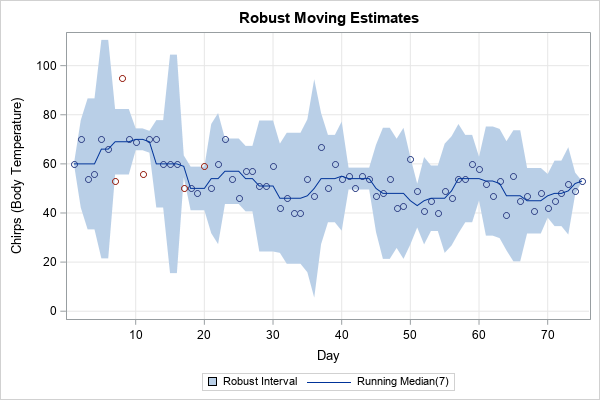 The graph verifies that the temperatures on days {7, 8, 11} are unusual. The temperatures on days {17, 20} are marginally outside of the Hampel intervals. As with all algorithms that identify potential outliers, you should always examine the potential outliers, especially if you plan to discard the observations or replace them with an imputed value.

Some practitioners in signal processing use the Hampel identifier to implement the Hampel filter. The filter replaces observations that are flagged as outliers with the rolling median. For example, the following SAS/IML code snippet shows how to replace outliers with the median values:

You can download the SAS program that creates all the analyses and graphs in this article.

This section briefly discusses the median absolute deviation (MAD) statistic, which you can think of as a robust version of the standard deviation. For univariate data X={x1, x2, ..., xL}, the MAD is computed by computing the median (m = median(X)) and the median of the absolute deviations from the median: MAD = median(|x_i - m|). You can compute the MAD statistic (and other robust estimates of scale) by using the ROBUSTSCALE option in PROC UNIVARIATE, as follows: 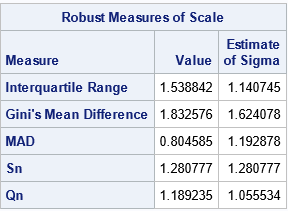 SAS also supports the MAD function in the DATA step and in PROC IML. If you are using a moving statistic, the MAD is applied to the data in each rolling window.

The post The Hampel identifier: Robust outlier detection in a time series appeared first on The DO Loop.