Many nonparametric statistical methods use the ranks of observations to compute distribution-free statistics. In SAS, two procedures that use ranks are PROC NPAR1WAY and PROC CORR. Whereas the SPEARMAN option in PROC CORR (which computes rank correlation) uses only the "raw" tied ranks, PROC NPAR1WAY uses transformations of the ranks, called scores, to compute rank-based analysis of variance (ANOVA), empirical distribution tests, and other analyses. This article shows two things:

What is a "score" in statistics?

Statisticians like the word "score." As a verb, "to score" means to evaluate a regression model on one or more observations. As a noun, "raw score" means the original data. "Standardized score" (or z-score) implies that the data have been transformed according to a standardizing transformation. The "rank score" (or Wilcoxon score) is the result of replacing each observation by its rank. Other types of rank-based scores, often called normal scores, are explained in the documentation for PROC NPAR1WAY, including the Blom, Tukey, and van der Waerden scores.

You can use the NORMAL= option in PROC RANK to obtain three common rank-based normal scores. The three scores are essentially the same and are can be used to construct normal Q-Q plots. Assume that the data do not have any duplicate values. Let Ri be the rank of the i_th observation of a data vector, X. Then the normal scores have the form
si = Φ-1( (Ri−c) / (n+b) )
where Φ-1 is the inverse standard cumulative normal distribution, and n is the number of nonmissing observations.

If the data have duplicate values, you need to adjust the formulas slightly, as shown in the last section of this article.

Why are normal scores useful?

The idea behind a normal score is rather clever. You compute the ranks of each variable and scale them so that they are in the range (0,1). You then compute the standard normal quantiles of these values. The resulting scores are often approximately normal.

Let's compute an example. First, let's compute the rank correlation between three variables in the Sashelp.Cars data set. The variables are not normally distributed, as shown by the matrix of scatter plots and the marginal histograms: 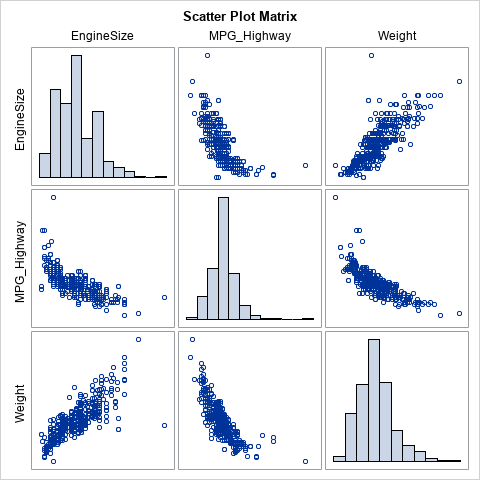 You can use PROC RANK to create new variables that contain the normal scores for the variables. The NORMAL= option supports all three normal scores. For this example, I will use the van der Waerden scores (NORMAL=VW). The following statements generate the variables, then compute the rank correlation between the scores: 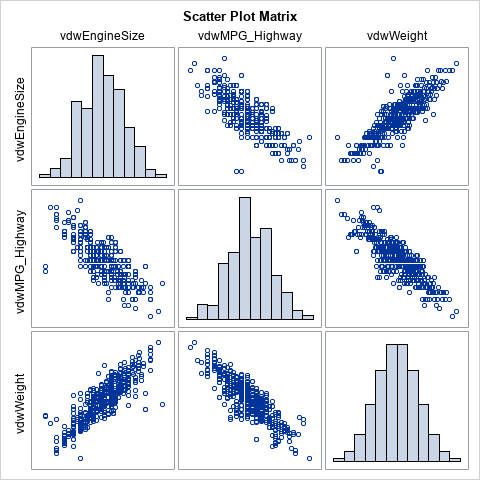 As mentioned previously, when there are tied values, the transformation to produce the normal scores needs to be modified. You might guess that you should compute the tied ranks and then transformed the tied ranks into normal scores. However, both PROC NPAR1WAY and PROC RANK do something slightly different. The following quote is from the documentation for PROC NPAR1WAY:

The following SAS/IML program computes the van der Waerden scores for the three variables in the Sashelp.Cars data. First, the program computes the scores "incorrectly" by using the RANKTIE function to compute the averaged ranks and then transforming the tied ranks. Next, the program uses the method in the PROC NPAR1WAY documentation to compute the correct scores. Both methods are compared to the output from PROC RANK. The numerical difference between the incorrect-but-fast method and the correct-but-slower method is very small.

The simple application of the van der Waerden formula is slightly different from the PROC RANK output. To get the correct scores, you must average the scores of the tied values. In practice, you can often use the simpler transformation, especially for large samples and for variables that have only a small proportion of tied values.

Even for moderate-sized samples (this example has 428 observations), the two methods tend to agree. For these data, the EngineSize variable has only 43 unique values. The MPG_Highway variable has only 33 unique values. Nevertheless, the simple computation of the van der Waerden scores is almost the same as the more complicated method that is used by PROC NPAR1WAY. A scatter plot of the two scores shows that the scores computed by the two methods are almost the same. The following statements create the scatter plot for the MPG_Highway variable: 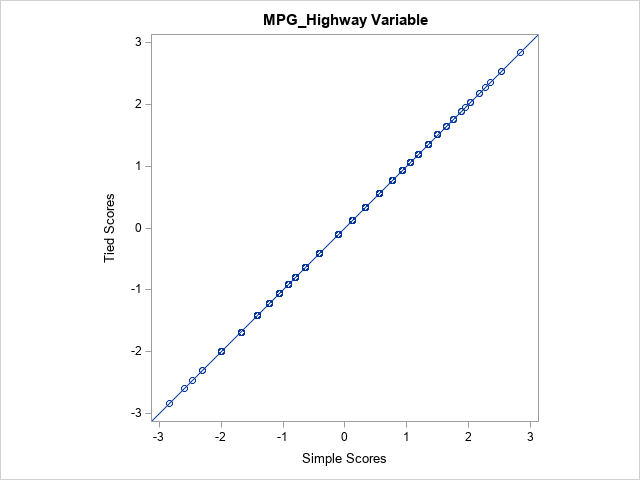 This article also shows the correct way to compute the normal scores for tied values in the data. However, there is often little difference between the true scores and a simpler approximation that transforms the tied ranks.

The post Rank-based scores and tied values appeared first on The DO Loop.