Do you ever use a permutation matrix to change the order of rows or columns in a matrix? Did you know that there is a more efficient way in matrix-oriented languages such as SAS/IML, MATLAB, and R? Remember the following tip:
Never multiply with a large permutation matrix! Instead, use subscripts to permute rows and columns.

The following example defines a 5 x 5 matrix, A, with integer entries and a function that creates a permutation matrix. (The permutation matrix is the transpose of the matrix that I used in the previous article. I think this definition is easier to use.) If you multiply A on the right (A*Q), you permute the columns. If you multiply A on the left (Q`*A), you permute the rows, as shown: 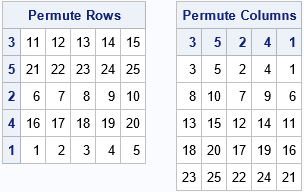 Permutation of indices for subscripts

The output is the same and is not shown. No computations are required, only copying data from one matrix to another. For v = {3 5 2 4 1}, the first syntax means, "copy the columns in the order, 3, 5, 2, 4, and 1." The second syntax specifies the order of the rows. You don't have to remember which side of A to put the permutation matrix, nor whether to use a transpose operation.

An application: Order of effects in a regression model

In my previous article, I used a correlation matrix to demonstrate why it is useful to know how to permute rows and columns of a matrix. Another application is the order of columns in a design matrix for linear regression models. Suppose you read in a design matrix where the columns of the matrix are in a specified order. For some statistics (for example, the Type I sequential sum of squares), the order of the variables in the model are important. The order of variables is also used in regression techniques such as variable selection methods. Fortunately, if you have computed the sum of squares and crossproducts matrix (SSCP) for the variables in the original order, it is trivial to permute the matrix to accommodate any other ordering of the variables. If you have computed the SSCP matrix in one order, you can obtain it for any order without recomputing it.

The SSCP matrix is part of the "normal equations" that are used to obtain least-squares estimates for regression parameters. Let's look at an example. Suppose you compute the SSCP matrix for a data matrix that has five effects, as shown below:

Now, suppose you want the SSCP matrix for the same variables in a different order. For example, you want the order {'MPG_City' 'Weight' 'Horsepower' 'MPG_Highway' 'EngineSize'}; which is the permutation {3, 5, 2, 4, 1} of the original ordering. You have two choices: permute the columns of the design matrix and recompute the SSCP or permute the existing SSCP matrix. The first way is intuitive but less efficient. It is shown below:

The second way is a one-liner and does not require any computations. You don't have to form the permutation matrix, Q. You only need to use subscripts to permute the new SSCP:

The output is exactly the same and is not shown. After you have obtained the SSCP matrix in the new order, you can use it to compute regression statistics. If you are solving the normal equations, you also need to permute the right-hand side of the equations, which will be equal to Q`*X`*y.

In summary, you rarely need to explicitly form a permutation matrix and use matrix multiplication to permute the rows or columns of a matrix. In most situations, you can use subscript indices to permute row, columns, or both rows and columns.

The post Never multiply with a large permutation matrix appeared first on The DO Loop.