A previous article discusses the geometry of weighted averages and shows how choosing different weights can lead to different rankings of the subjects. As an example, I showed how college programs might rank applicants by using a weighted average of factors such as test scores. "The best" applicant is determined by the choice of weights. If you change the weights, you change the definition of "the best."

The same ideas can be used to rank sports teams at tournaments. For some sports, the governing body dictates how to rank teams based on the team's performance in individual events. However, I can think of at least one popular international sporting event that awards medals (gold, silver, and bronze) to individual athletes, but does not endorse a method for converting the number of medals won into a team score. Accordingly, fans have suggested multiple ranking methods. This article discusses various ranking methods and shows how the rankings change for each method.

Some sports have established weights

For some sports, the governing body has published how to rank teams based on the performance of team members in individual events. Some sports use different scoring systems at different levels of competition, but a few representative systems are listed below.

One popular sporting tournament awards medals to the top-three individuals but does not endorse a formula that converts medals into a team score. But that doesn't prevent fans from coming up with their own formulas! Some fans argue that "the best" team is the one with the most gold medals. Others argue that the team that has the most overall medals is the best. Others favor a weighted scheme in which a gold medal is worth more than a silver, which is worth more than a bronze. This last scheme has many variations, depending upon how much weight you assign to each medal.

Suppose that the i_th team wins Gi gold medals, Si silver medals, and Bi bronze medals. In a weighting scheme, you choose the weights for gold, silver, and bronze medals. If the vector w = (wG, wS, wB) contains the weights, then the score for each team is computed as Si = wG*Gi + wS*Si + wB*Bi. In addition, we impose the constraints that wG ≥ wS ≥ wB ≥ 0.

Many media outlets report the total medals awarded, so let's start by looking at the weighting scheme with the weight vector w = (1, 1, 1). For data, let's use the medal counts from an international competition that took place in Tokyo, Japan. You can use PROC RANK in SAS to rank the teams according to the total number of medals, as follows: 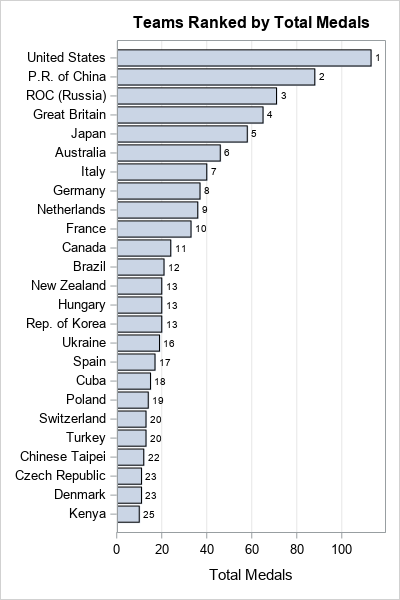 The graph displays the total medal count for 25 participating teams. The number to the right of each bar is the rank for the team when you choose equal weights for the medals. This is merely one weighting method that you can use.

Under this set of weights, a team that wins 10 gold medals (and nothing else) gets the same rank as a team that wins 10 bronze medals (and nothing else). To some, this seems unfair to the first team. Consequently, it makes sense to consider weights for which gold is weighted more than silver, which is weighted more than bronze.

You can use the SAS DATA step to compute the scores for each team under each different weighting scheme: 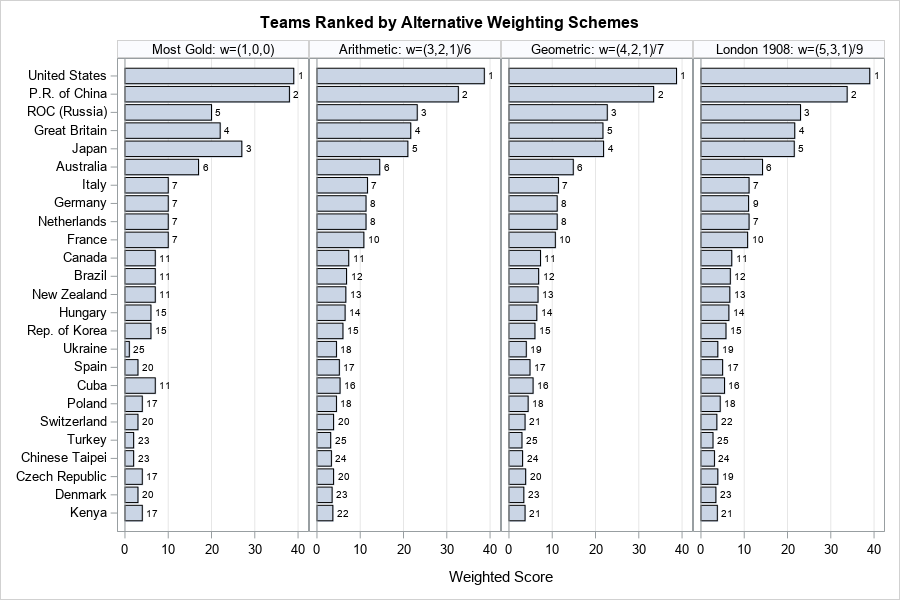 Click on the panel to enlarge the graph. In the panel, the teams are listed according to the total number of medals. In each panel, the length of the bar shows the team scores under a different weighting scheme. The numbers to the right of the bars indicate the team ranks. For these data, all methods consistently rank USA and China as the top teams. However, the ranks of other teams move around as you change the weighting criteria. Pay particular attention to teams that have an unequal distribution of medal types, such as Ukraine (1 gold; 6 silver; 12 bronze), Cuba (7 gold, 3 silver, and 5 bronze), and Turkey (2 gold, 2 silver, 9 bronze). For methods that give gold much more weight than bronze, Cuba will rank higher, and Ukraine and Turkey will rank lower, relative to using equal weights.

Rankings are everywhere. Behind every ranking is a vector of weights that assigns the relative importance of the factors. As demonstrates in these articles, if you change the weights, you will change the scores, which often change the rankings. Consequently, when you see a ranking reported in the media, you should think about what criteria (and biases!) are used to create the ranking. Are they the same criteria that you value? Furthermore, you should realize that a slight tweak to the weights will often change the rankings. A team that is ranked 10th in one set of rankings might be ranked considerably higher or lower if you use slightly different criteria. When the rankings are based on statistical quantities (such as means and proportions), you can add confidence limits that quantify the uncertainty in the rankings.

Although the example uses sports teams, the same analysis is generally applicable for ranking other quantities: stocks, loan applicants, suppliers, job applicants, and so forth.

The post A comparison of different weighting schemes for ranking sports teams appeared first on The DO Loop.