The term "fuzzy matching" describes a method of comparing two strings that might have slight differences, such as misspelling or a middle initial in a name included or not included. One of my favorite functions to compare the "closeness" of two strings is the SPEDIS (spelling distance) function.

Have you ever misspelled a word in Microsoft Word? If so, the word is underlined in red (so they tell me, because I have never misspelled anything) and if you right-click on the word, you see a list of possible alternatives. The algorithm used is similar to the SPEDIS function.

Here is how the SPEDIS function works. It takes two arguments, representing the two strings being compared. If the two strings are exactly the same, the function returns a zero. For each spelling mistake, the function assigns penalty points. Some errors are assigned more penalty points than others. For example, getting the first letter wrong in a word earns high points—interchanging two letters (for example 'ie' for 'ei') earns only a few points. Other errors such as adding a letter or omitting a letter, result an intermediate number of penalty points.

After the two strings are compared, all the penalty points are added up. However, it is not finished yet.  The SPEDIS functions returns the number of penalty points as a percentage of the length of the function's first argument. Why does this make sense? Making a spelling mistake in a three-letter word is quite a severe error. Making a spelling mistake in a 10-letter word is considered a minor mistake. 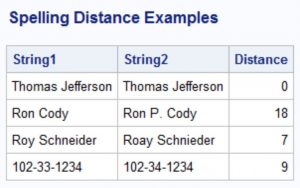 Notice that the SPEDIS function is also useful in comparing digits, such as Social Security numbers.

The next program demonstrates how to use the SPEDIS function to perform a fuzzy match:

❶ To be on the safe side, two functions, COMBL and PROPCASE, are used to convert multiple spaces to a single space (COMPBL) and to convert all names to proper case (PROPCASE).

❷ You use COMPBL and PROPCASE on the second data set.

The table below is a partial listing of the Cartesian Product of the two data sets Compare1 and Compare2 (without a WHERE clause). 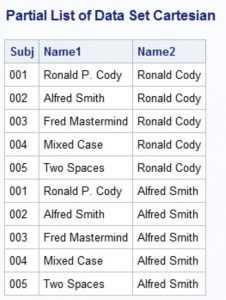 Next is the remaining code that produces two data sets—one with exact matches and one with possible matches:

❸ This is the PROC SQL code that create the Cartesian Product. You can get more information on this from SAS Help.

❹ If the SPEDIS function returns a 0, you have an exact match.

❺ You repeat the SQL code to create the data set for close, but not exact matches.

❻ You are looking for spelling distances greater than 0 and less than or equal to 25.

Here are the two listings.

You will need to experiment with the value you choose for considering two strings to be a possible match. I chose 25 in the sample program. If you want to be more certain that the names are possible matches, use a smaller number for creating the data set Exact. If you want to see even remote possible matches, choose a larger value. You also need to consider the length of the two strings. If they are quite long, you might choose a smaller value to be considered a match because the percentage for a single spelling error will result in a relatively small value for the spelling distance.