I previously mentioned that some SAS procedures are CAS-enabled, which means that they will call a CAS action that runs on the CAS server if you specify a CAS table on the DATA= option. However, I also mentioned that some Base SAS procedures are "hybrid," which means that they might run on the CAS server or on the SAS Compute Server. But be careful: some Base SAS procedures (including the DATA step) look at the options that you specify to decide whether they can process the data on the CAS server. If not, they will pull the data down from the server to the SAS client and compute the result there. This is probably not what you want. It is inefficient to copy data from the CAS server if you can perform the computation on the server where the data are.

PROC MEANS is a hybrid procedure

A good example of a hybrid procedure is PROC MEANS. If the data are in a CAS table, PROC MEANS will look at the options that you specify. If you request basic descriptive statistics (N, MIN, MAX, MEAN, STD, etc), the procedure will call the aggregate action and compute the statistics in CAS. However, for some procedure options (and, I confess, I don't know which ones) the procedure decides that the requested statistics should be computed on the SAS client and uses the CAS LIBNAME engine to access the data. This results in reading the data from the CAS table and performing the computation on the SAS client.

Let's construct an example for which PROC MEANS computes the statistics in CAS. The following program loads the data in the Sashelp.Cars data set into a CAS table. It then calls PROC MEANS to compute descriptive statistics:

The procedure outputs a familiar table that displays the mean, min, and max statistics for two variables, each grouped according to levels of the classification variable. In addition, the procedure displays the following note in the log:

The behavior of PROC MEANS changes if you request percentiles. For some reason (unknown to me), the percentiles are not computed on the CAS server. Instead, the data are read from the CAS table by using the CAS libname engine, and the computation takes place on the SAS client:

In addition to the output, the procedure writes the following note to the log:

This note implicitly tells you that the computation did not occur on the CAS server.

Computing percentiles on the CAS server

Although PROC MEANS does not automatically compute percentiles on the CAS server, you can use a CAS action to estimate the percentiles. By definition, an action always computes on the CAS server. I often look at the "Action Sets by Name" documentation when I am trying to find an action that will perform an analysis. In this case, you can search that page for the word "percentile" and find the documentation for the syntax of the percentile action. There are separate tabs for calling the action from SAS (the "CASL syntax"), from Lua, from Python, and from R. This article uses the CASL syntax, which tells you how to call the action from PROC CAS in SAS. 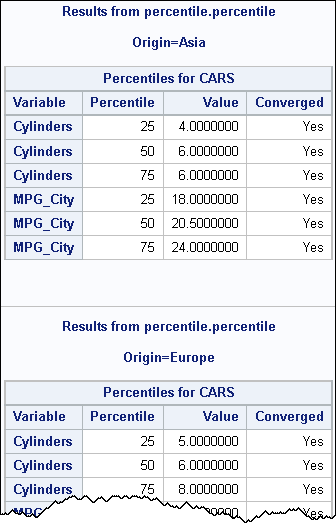 The output from the percentile action is in "long form" rather than "wide form," but the estimates are the same.

You might notice that the output contains a column labeled "Converged," and that the rows display "Yes." By default, the percentile uses an iterative process (method="ITERATIVE") to estimate the percentiles. The documentation states that the iterative process "is very memory efficient to compute percentiles." If you want to run a different estimation method, you can change some parameters. Most importantly, you can use the values= parameter to specify any percentiles values in [0, 100]. (By convention, the 0th percentile is the sample minimum and the 100th percentile is the sample maximum.) For example, the following statements use the default estimation method that PROC MEANS uses and add additional values to the list of percentiles. 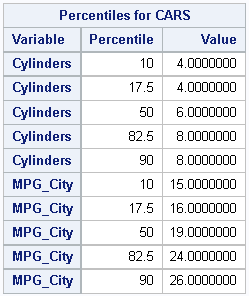 The percentile action also supports a weight= parameter, which you can use to specify a weight variable to compute weighted percentiles.

The post Estimate percentiles in SAS Viya appeared first on The DO Loop.