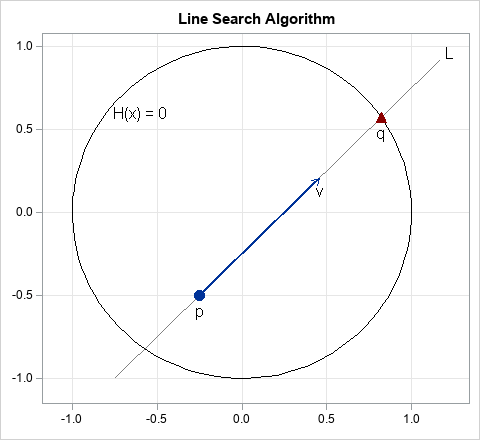 Recently, I needed to implement a line search algorithm in SAS. The line search is illustrated by the figure at the right. You start with a point, p, in d-dimensional space and a direction vector, v. (In the figure, d=2, but in general d > 1.) The goal is to search along the line, L, that passes through p in the direction of v. Typically, you are searching for the root of some scalar-valued multivariate function, H(x). The goal is to search along the line until you intersect the curve given by H(x)=0. In the figure, \(H(\mathbf{x}) = x_1^2 + x_2^2 - 1\), so the expression H(x)=0 defines the unit circle, where x = (x1, x2). In the figure, the search finds the point q, which is on the unit circle. This point might not be unique. In general, the line might intersect the curve H(x)=0 at multiple points, or not at all. For this example, the line intersects the circle at two points.

This article shows how to implement a line search algorithm in SAS by using the SAS/IML language. When you use a matrix language, the program is amazingly compact.

You can implement the line search algorithm in four steps:

One of the advantages of the SAS/IML matrix language is that you can often directly translate an algorithm from its mathematical formulation to its syntax in a natural way. The following program implements the line search algorithm:

The program is quite compact. Each step requires only a few lines to implement. The result is that the point (0.82, 0.57) is a point on the unit circle. It is one of the points that lies on the line with unit slope that passes through the point (-0.25, -0.5).

In this implementation, there are three IML-specific statements that I want to explain:

More solutions along the line

As mentioned previously, there are two points along the line that intersect the unit circle. You can get the other point by searching in the direction of -v or by considering negative values for the parameter t. I prefer the second method. The second argument to the FROOT function is a matrix of intervals to search for a root. The following statement finds two roots for F(t), one in the interval [0, 2] and the other in the interval [-2, 0].

The output shows that the point (-0.57, -0.82) is another point of intersection between the circle and the line.

Here's an interesting question to consider. The previous program solves the case of a line intersecting the unit circle in the 2-D plane. How much of the program do you need to change to solve the generalized problem of a line intersecting a unit sphere in 3-D space? If you want to ponder that question, stop reading and study the program carefully before you read on.

Ready? Okay. The answer is that you don't have to change any of the computational statements in the program. None. Zero. Zip. Zilch. Nada. I wrote the program by using a coordinate-free vector formulation. Consequently, the same functions work for a line search in higher dimensions. For example, the following program finds the intersections of a line in 3-D space and the unit sphere. The line is defined by specifying a 3-D point and a 3-D vector, which determines a direction:

The output tells you that the line intersects the sphere at two points: q1 = (-0.56, -0.81, -0.21) and q2 = (0.49, 0.24, 0.84). The computational portions of the program are independent of the dimensions of the space. Of course, if you want to intersect a surface that is different than the unit sphere, you will have to redefine the function that evaluates the H function, but you would not have to change the F function.

In summary, this article shows how to implement a line search algorithm in SAS by using the SAS/IML language. The implementation in a matrix language is very compact. Furthermore, it is often the case that key portions of the program can be written in a coordinate-free manner, which means that the program can be easily modified to handle line searches in arbitrary dimensions.

The post Implement a line search algorithm in SAS appeared first on The DO Loop.