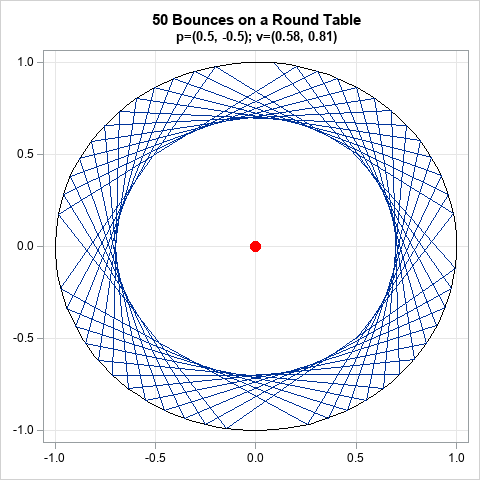 I recently showed how to find the intersection between a line and a circle. While working on the problem, I was reminded of a fun mathematical game. Suppose you make a billiard table in the shape of a circle or an ellipse. What is the path for a ball at position p on the table if it rolls in a specified direction, as determined by a vector, v? A possible path is shown in the graph at the right for a circular table. The figure shows the first 50 bounces for a ball that starts at position p=(0.5 -0.5) and travels in the direction of v=(1, 1).

This article shows how to use SAS to compute images like this for circular and elliptical tables.

One of the advantages of the SAS/IML matrix language is its natural syntax: You can often translate an algorithm from its mathematical formulation to a computer program by using only a few statements. This section presents the mathematical formulation for finding the trajectories of a ball on a circular or elliptical billiard table, then shows how to translate the math into SAS/IML statements.

The fundamental mathematical assumption is that all collisions are perfectly elastic and that the angle of incidence equals the angle of reflection. For a curved surface, the angles are measured by using the normal and tangent vectors to the curve. The geometry is shown in the following figure. 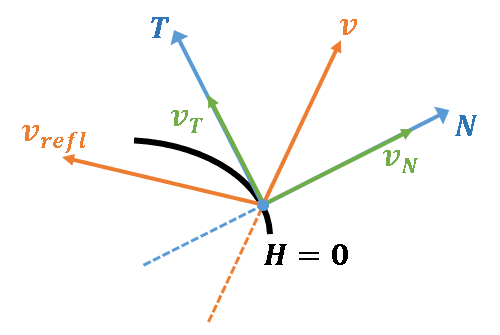 A ball moves toward the boundary of the table with velocity vector v. The boundary is represented as the level set H = 0 for some bivariate function, H(x). For example, a circular table uses H(x,y) = x2 + y2 - 1. The previous article showed how to find the point at which the ball hits the curve.

You can compute the unit normal vector, N, at that point by using the gradient of H. Project the velocity vector onto the unit normal to obtain vN. The linear space orthogonal to N is the tangent space. The vector vT = v - vN is the projection of v onto the tangent space. (Note that v = vT + vN.) The reflection of v is defined to be the vector that has the same tangent components but the opposite normal components, which is vrefl = vT - vN. A little algebra shows that vrefl = v - 2vN, so, in practice, the projection onto the tangent space is not needed.

The following SAS/IML program implements functions that compute these vectors. To test the functions, assume a ball is initially at the point p=(0.5, -0.5) and moves with unit velocity v=(1, 1)/sqrt(2), which is 45 degrees from the horizontal.

From the initial position and velocity, it is clear that the ball will hit the circle at q=(1,0) and reflect off at 135 degrees, which is the direction vector vrefl=(-1, 1)/sqrt(2). For this geometry, the unit normal vector at q is N=(1,0) and the unit tangent vector is T=(0,1), so it is easy to mentally verify that the program is giving the correct values for the vectors in this problem.

Bouncing around a billiard table

Let's play a game of billiards on a table that has a nonstandard shape. To begin the game, you must specify the initial position (p) and velocity (v) of the ball, as well as the shape of the table (a function H). The algorithm is simple:

The following SAS/IML program implements this algorithm by using the F_Line and FindIntersection functions from the previous article:

These initial conditions are highly symmetric and therefore easy to visualize. From the initial position and velocity, the ball hits the boundary of the circular table at (1,0), (0,1), (-1,0), and (0,-1) before returning again to (1,0). The ball will follow this periodic trajectory forever. It will always hit the same four points on the boundary of the circle.

For a general initial condition, you will want to draw a graph that visualizes the orbit of the ball as it bounces across the table. You can download the SAS program that computes the graphs in this article. For ease of use, I encapsulated the computations and visualization into a module called Billiards. You can call the Billiards subroutine with an initial condition and the number of bounces and the module will return a graph of the trajectory of the ball. For example, the following statements generate the first 50 bounces of a ball on a circular table:

The graph is shown at the top of this article. For this example, the ball bounces around the table inside an annular region. For a circular table, you can prove mathematically that every trajectory is either a periodic orbit or is dense in an annular region.

Billiards on an elliptical table

If you study the previous program, you will see that the program does not use any special knowledge of the shape of the table. Given any smooth functions H and grad(H), the program should be able to handle tables of other shapes. That is the advantage of writing a program that uses vectors in a coordinate-free manner.

You can show that the path of a ball on an elliptical table is one of three shapes:

The following examples show each case: 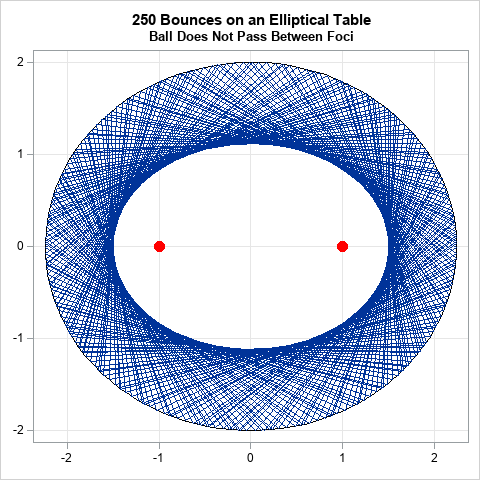 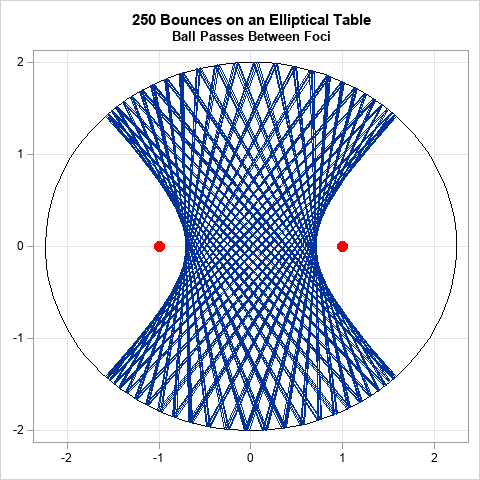 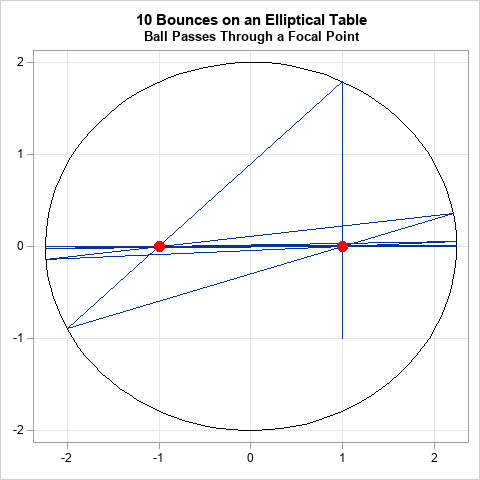 You can download the SAS program that I used to create the graphs in this article.

The post Billiards on an elliptical table appeared first on The DO Loop.