The nth roots of unity

Recall that the nth root of unity for a positive integer, n, is a complex number, z, such that the nth power of z equals 1. In symbols, z satisfies the equation zn = 1.

The πth roots of unity

Geometrically, the πth roots are generated by rotating the unit circle by 2 radians or by -2 radians. For simplicity, the subsequent sections visualize the πth roots for only the positive integers, which correspond to counterclockwise rotations by 2 radians.

Visualize the πth roots of unity

Let's generate some positive integers and plot the complex points exp(2 i n) in the Argand plane. To get started, let's plot only the images of the first 25 even integers: 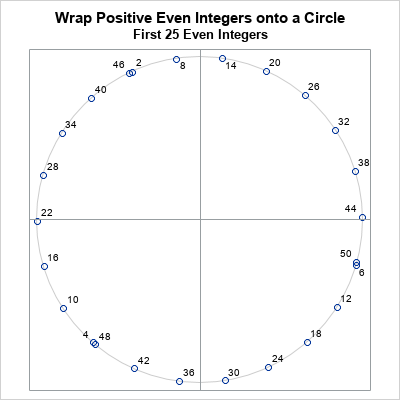 Geometrically, you can think of wrapping the real number line onto the circle like thread onto a spool. The points show the images of the even integers. You can see that 2 is mapped into the second quadrant, 4 is mapped to the third quadrant, and 6 is mapped to the fourth quadrant just below the point (1,0) because 6 radians is slightly less than 2π. This pattern repeats for the images of 8, 10, and 12. Each set of three points slightly lags the previous set of three points.

The first 22 images are nearly equally spaced on the circle, but not quite. You can see that the images of 46, 48, and 50 almost overlay the images of 2, 4, and 6, but are slightly separated. This pattern continues for the next set of 22 even integers, and the next, and the next. No image ever hits a previous image because we are rotating by 2 radians and there are 2π radians in a circle. (These numbers are not commensurable.) The following graph shows the image of a few hundred even integers onto the circle: 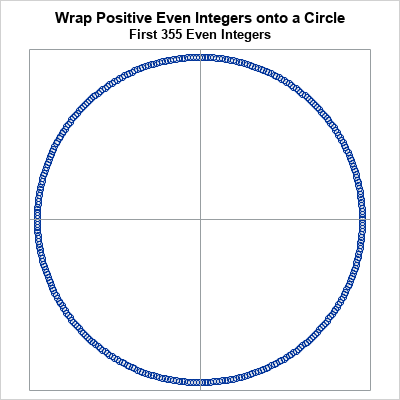 The Beatty sequence on the circle 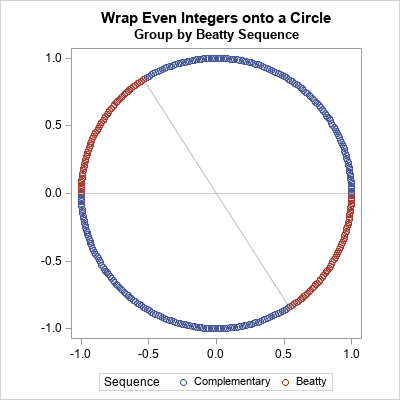 The graph shows that (1/π)th of the πth roots of unity belong to the Beatty sequence for π. And these numbers are all clumped together into two arcs on the circle.

There are infinitely many πth roots of unity. They are complex numbers of the form \(\exp(2 i n)\) for any integer, n. Geometrically, you can visualize these points as the rotations by ±2 radians of the point (1,0) in the Argand plane. The πth roots of unity are dense in the unit circle. If you restrict your attention to only positive rotations (the images of the positive integers), you can classify each root according to whether it is the image of an even integer in the Beatty sequence for π or in the complementary sequence. The points that are in the Beatty sequence are mapped to the arcs for angles (π-1, π) and (2π-1, 2π). These arcs are (1/π)th of the arclength of the unit circle.

You can download the SAS program that creates these images.

The post The pi_th roots of unity appeared first on The DO Loop.