I created this project as a fun exercise to emulate the popular game Wordle in the SAS language. I was inspired by this story about a GitHub user who implemented Wordle in a Bash shell. (See the Bash script here. Read the comments -- it's an amazing stream of improved versions, takes in different programming languages, and "code golf" to reduce the lines-of-code.)

While developing my SAS solution, I created a Twitter poll to ask how other SAS programmers might approach it.

For me it was always going to be arrays, since that's what I know best. I'd love to be able to dash out a hash object approach or even use SAS/IML, but it would take me too long to wrap my brain around these. The PRX* regex function choice is bit of a feint -- regular expressions seem like a natural fit (pattern matching!), but Wordle play has nuances that makes regex less elegant than you might guess. Prove me wrong!

Two SAS users from Japan, apparently inspired by my poll, each implemented their own games! I've added links to their work at the end of this article.

How to code Wordle in SAS

You can see my complete SAS code for the game here: sascommunities/wordle-sas.

The interesting aspects of my version of the game include:

I've added a screenshot of example game play below. This was captured in SAS Studio running in SAS Viya. 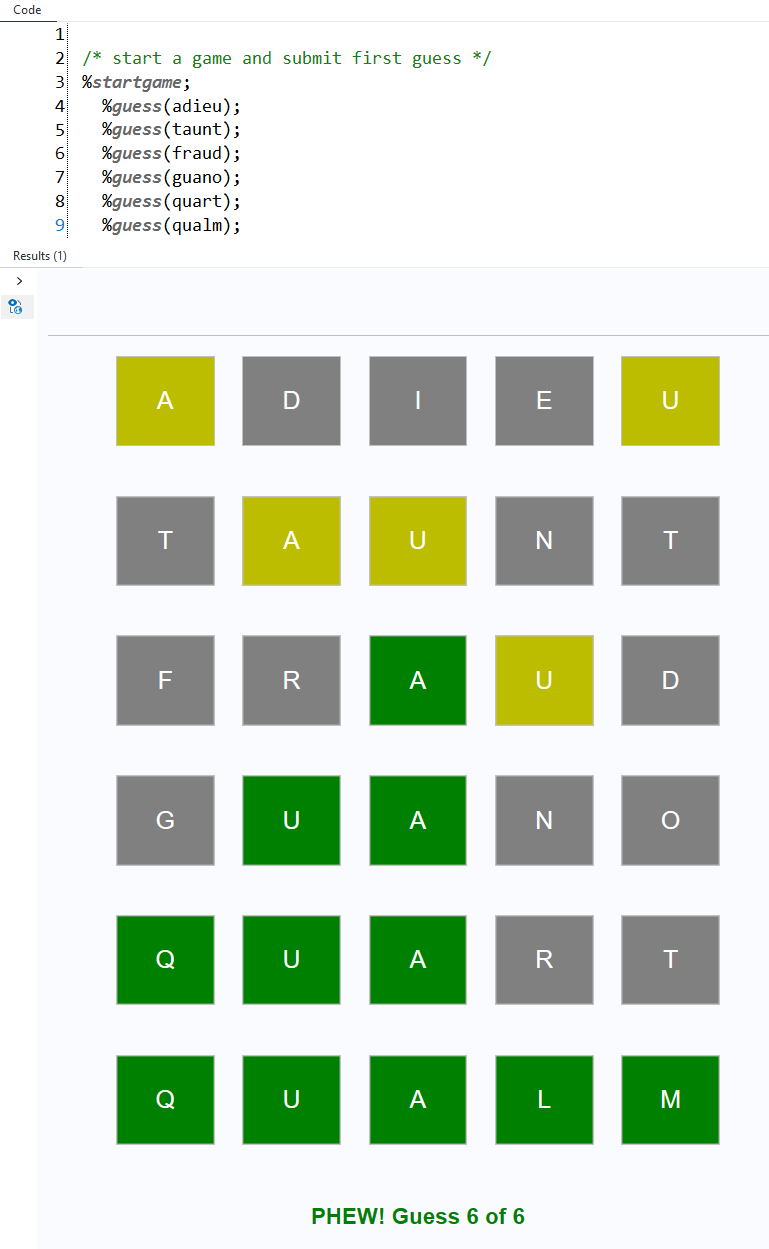 Example game play for my Wordle in SAS

How to play Wordle in SAS

Use the %guess() macro (one at a time) to submit additional guesses. The program keeps track of your guesses and when you solve it, it shares the familiar congratulatory message that marks the end of a Wordle session. Ready to play again? Use the %startGame macro to reset.

If you don't want to look at or copy/paste the game code, you can use Git functions in SAS to bring the program into your SAS session and play. (These Git functions require at least SAS 9.4 Maint 6 or SAS Viya.)

I know that my program could be more efficient...perhaps at the cost of readability. Also it's possible that I have some lingering bugs, although I did quite a bit of testing and bug-fixing along the way. Pro tip: The DATA step debugger (available in SAS Enterprise Guide and in SAS Viya version of SAS Studio) was a very useful tool for me!

Your feedback/improvements are welcome. Feel free to comment here or on the GitHub project.

Wordle games in SAS by other people

SAS users in Japan quickly implemented their own versions of Wordle-like games. Check them out:

The post Programming the Wordle game in SAS appeared first on The SAS Dummy.