Longitudinal data are measurements for a set of subjects at multiple points in time. Also called "panel data" or "repeated measures data," this kind of data is common in clinical trials in which patients are tracked over time. Recently, a SAS programmer asked how to visualize missing values in a set of longitudinal data. In his data, the patient data was recorded every week during a 10-week trial, but some patients missed one or more appointments. The programmer wanted to visualize the missed appointments.

The SAS programmer shared a table that showed the structure of his data. To create the data in a SAS data set, I will demonstrate a DATA step technique that deserves to be better known. It involves using a trailing @ to create multiple observations from a single line of input. You can read about the trailing @ in the documentation of the INPUT statement. Basically, it enables you to use multiple INPUT statements to read a single line of data. The following DATA step illustrates the trailing @ technique:

The DATA step creates data for five patients in a study. Each record starts with the patient ID and the number of visits for that patient. The first INPUT statement reads that information and uses the trailing @ to hold the pointer until the next INPUT statement. Because we know the number of visits for the patient, we can use a DO loop to read the (Week, Value) pairs for each visit, and use the OUTPUT statement to create one observation for each visit.

All patients have the initial baseline measurement (Week=0) but some patients did not show up for a subsequent weekly visit. Only one patient has measurements for all 11 weeks. One patient has only five measurements, and they are widely spaced apart in time. Overall, these patients attended 39 appointments and missed 16.

This is the form of the data that the SAS programmer was given. Notice that there are no SAS missing values (.) in the data. Instead, the missing appointments are implicitly defined by their absence. As we will see later, it is sometimes useful to explicitly represent the missed appointments by using missing values. But first, let's see how to visualize these data in their current form.

The traditional way to visualize longitudinal data is to create a spaghetti plot, as follows: 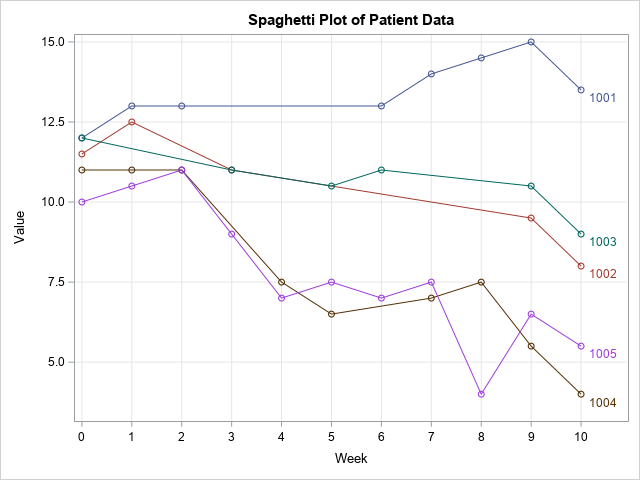 Now imagine a study that has 20 or 50 patients. Many lines will overlap, and the missed appointments will be very difficult to see. Although the spaghetti plot is a good way to visualize nonmissing data, it is not good at showing patterns of missing values.

You can use the HEATMAPPARM statement in PROC SGPLOT to create a lasagna plot for these data. The following example creates the lasagna plot and uses a white-yellow-orange-red color map to visualize the measurements for each time point. 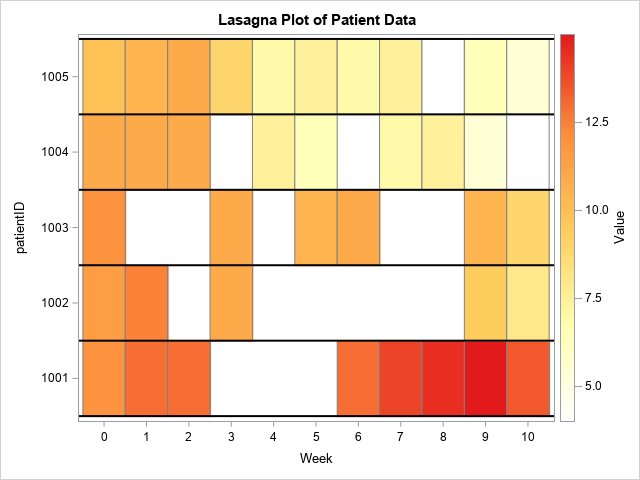 The lasagna plot does an excellent job of visualizing the data for each patient. You can see gaps for PatientID=1001 and PatientID=1002. These gaps are missing data.

However, there is a potential problem with this graph. I intentionally used white as one of the colors in the color model because I want to emphasize a problem that can occur when you create a heat map that has missing cells. In this graph, the color white is used for two different purposes! It is the color of the background, and it is the color for the lowest value of the measurement (Value=4.0). When a value is missing, the heat map does not display a cell, and the background color shows through as for PatientID=1001. On the other hand, PatientID=1005 does not have any missing values, but the patient does have a measurement (Week=8) for which Value=4.0. That cell is also white!

There are a few ways to handle this situation:

The first option (change the color model) is the easiest but might not be possible if your boss or client insists on a color model that uses white. The subsequent sections explore the other two options. 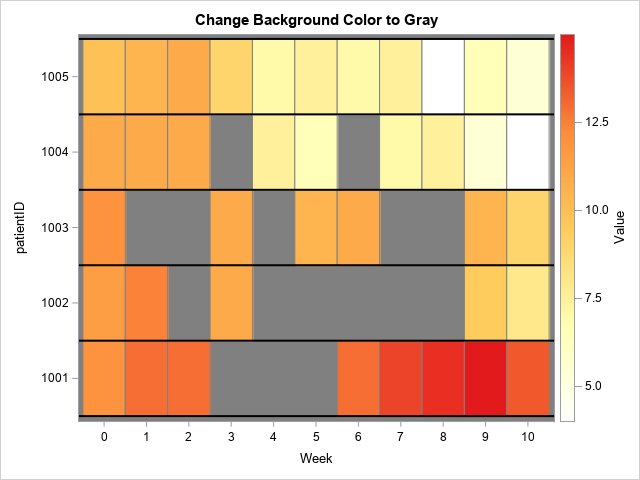 Now the gaps in the heat map are not white. The missing appointments are "visible" via the gray background. You can use the WALLCOLOR= option for all graphs. Notice, however, that the background color shows around the edges of the heat map. If you want to get rid of that edge effect, you can use the options OFFSETMIN=0 and OFFSETMAX=0 on the XAXIS and YAXIS statements. For example:

The structure of the data makes it difficult to perform an analysis on the number and pattern of missed appointments. In its current form, the data set has 39 observations to represent the 39 visits from among the 55 scheduled appointments. If you want to analyze the missing values, it is better to restructure the data to include SAS missing values in the data.

An alternative structure for this data is for all patients to have 11 observations, but for the Value variable to be missing for any week in which the patient missed his appointment. The following DATA step creates a new data set for this alternative structure. First, a DATA step creates 11 weeks of missing values for each patient. The values of the PatientID variable are read by using a BY statement and the values of the FIRST.PatientID automatic variable. Then, this larger data set is merged with the observed data. Any observed values overwrite the missing values.

If you create a heat map for the data in this new format, every cell will be plotted. The cells that contain missing values will be displayed by using the color for the GraphMissing style element in the current ODS style. For my ODS style (HTMLBlue), the color for missing cells is gray. 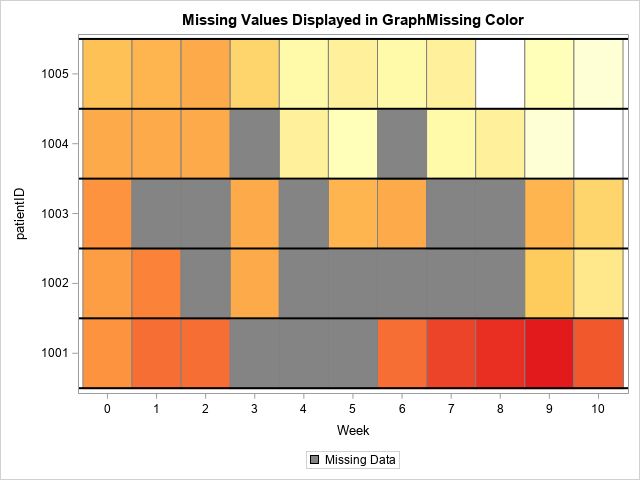 This article also demonstrates how to use a trailing @ in a DATA step. This enables you to create multiple observations from a single line of input. Thanks to Warren Kuhfeld, who showed me how to read data by using this useful technique many years ago.

The post Visualize missing values in longitudinal data appeared first on The DO Loop.