The McNemar test (also called McNemar's test) is a way to test whether the off-diagonal elements in a 2 x 2 frequency table are significantly different. The data are assumed to be matched-pairs data, which means that they represent the responses of one set of subjects measured before and after a treatment or intervention. Situations in which you could use McNemar's test include the following:

In both examples, the same subjects are tested twice. You can use the McNemar test can assess whether there is evidence that the proportion of negative results (not reading at grade level, not feeling pain) is different after the intervention as compared to before the intervention. 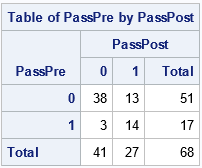 the null hypothesis for McNemar's test is that the intervention has no effect, which means that the probabilities for the cells b and c are equal.

You can use the AGREE option on the TABLES statement in PROC FREQ to run the McNemar test in SAS. The test statistic is the quantity M = (b - c)2 / (b + c). When b and c are both large, the statistic is distributed as a chi-squared variable with DF=1 degrees of freedom. The following SAS program defines the data and uses the AGREE option to run the McNemar test on this example:

Notice how the data are entered. Each row of the input data set represents a group of students of size COUNT. The binary values of the PassPre and PassPost variables indicate whether the students passed (1) or did not pass (0) each test. The WEIGHT statement in PROC FREQ is used to specify the count for each observation possible pair of outcomes. You could also enter the data by using 68 rows, where each row represents a student.

The value of the McNemar statistic is M = (13 - 3)2 / (13 + 3) = 6.25. The p-value is 0.0124, which means that it is unlikely to observe a statistic this large by chance if the intervention has no effect. Think of it this way: if you distribute 16 students at random to the two off-diagonal cells, there is only a small chance that the distribution would be this lopsided (13 vs 3) if the chance of landing in either cell is 50-50. Therefore, you reject that hypothesis and conclude that the intervention had an effect on the students who failed one test and passed the other.

The assumption that McNemar's statistic is chi-square distributed is an asymptotic result for large values of the c and d frequencies. If (b + c) is small (Wikipedia suggests less than 25), then the sampling distribution for the statistic might not follow a chi-square distribution. In that case, you should use an exact test. For the data in this example, the sum of the off-diagonal frequencies is b + c = 16. In PROC FREQ in SAS, you can run an exact test by using the EXACT MCNEM statement, as follows:

The output shows that the p-value for the exact test is larger than the p-value under the chi-squared assumption.

The formulas for these tests are easily implemented in the SAS DATA step or in the SAS/IML language. The following call to PROC IML computes the statistic and p-values: 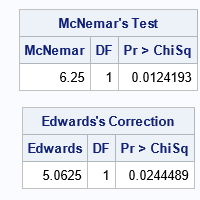 If your software reports a value for McNemar's test that is smaller than the value reported by SAS, it is possible that the software is applying Edwards's correction.

The McNemar test is easy to code manually, and the exact McNemar test is not much harder. Let S = b + c be the sum of the off-diagonal elements. (S=16 in this example.) The null hypothesis is that there is no difference in the proportion of students in the off-diagonal elements. Under this hypothesis, the probability of seeing the value k in one cell and S-k in the other cell is given by the binomial density PDF("Binom", k, 0.5, S). The p-value is the sum of the probabilities for values of k that are more extreme than the observed values. For this problem, it is the sum of the probabilities for k=0, 1, 2, 3, 13, 14, 15, 16.

The sum of a discrete PDF can be computed by using the cumulative distribution (CDF). Because the binomial distribution is symmetric, we only need to compute the CDF for k ≤ 3 (the left tail) and multiply the result by 2 to obtain the probability for the right tail. The following SAS/IML statements implement the exact test:

The post The McNemar test in SAS appeared first on The DO Loop.