It is an intriguing question. This article shows that, yes, you can use an ODE solver to compute some definite integrals. However, just as a builder should use the most appropriate tools to build a house, so should a programmer use the best tools to solve numerical problems. Just because you can solve an integral by using an ODE does not mean that you should discard the traditional tried-and-true methods of solving integrals.

The most famous differential equation in probability and statistics

However, there is a problem. By integrating both sides of the differential equation, you obtain \(F(x) = \int_{-\infty}^x f(s) \, ds\). Because the lower limit of integration is -∞, you cannot solve the differential equation as an initial-value problem (IVP). An initial-value problem requires that you know the value of the function for some finite value of the lower limit. 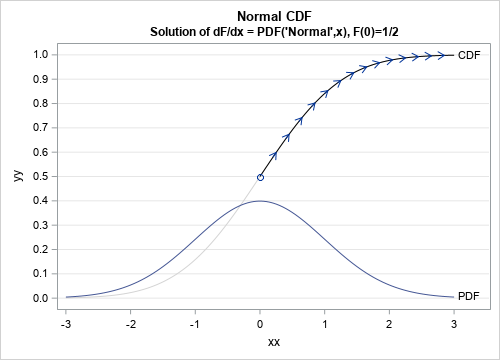 This symmetry idea is shown in the graph to the right for the case of the standard normal distribution. The normal distribution is symmetric about the median s0=0. This means that the CDF passes through the point (0, 1/2). You can integrate the ODE to obtain the CDF curve for any positive value of x. The computations are shown in the next section.

Solve an integral to find the normal probability

I like to know the correct answer BEFORE I do any computation. The usual way to compute an integral in SAS is to use the QUAD subroutine in SAS/IML software. (QUAD is short for quadrature.) This subroutine is designed to compute one-dimensional integrals. To use the QUAD subroutine, you need to define the integrand and interval of integration. For example, the following statements define the integral for the normal PDF on the interval [0, 3]:

Solve an ODE to find the normal probability

The module that evaluates the right-hand side of the ODE must take two arguments. The first argument is the independent variable, which is x. The second argument is the state of the system, which is not used for this problem. You also need to specify the initial condition, which is F(0)=0.5. Lastly, you also need to specify the limits of integration which is [0, 3]. The following statements use the ODE subroutine in SAS/IML software to solve the IVP defined by F`(x)=PDF("Normal",x) and F(0)=0.5:

Success! The ODE gives a similar numerical result for the integral of the PDF, which is the CDF at x=3.

Integrating an ODE is a poor way to compute an integral

Although it is possible to use an ODE to solve some integrals on a finite domain, this result is more of a curiosity than a practical technique. A better choice is to use a routine designed for numerical integration, such as the QUAD subroutine. The QUAD subroutine can integrate on any domain, including infinite domains. For example, the following statements integrate the normal PDF on [-3, 3] and (-∞, 3), respectively.

The phrase "numerical integration" has two meanings in numerical analysis. The usual meaning is "quadrature," which means to evaluate a definite integral. However, it is also used to describe the numerical solution of an ODE. In certain cases, you can use an ODE to solve a definite integral on a bounded domain. However, the ODE requires special additional information such as knowing an "initial condition." So, yes, you can (sometimes) solve integrals by using a differential equation, but the process is more complicated than if you use a standard method for solving integrals.

The post Two perspectives on numerical integration appeared first on The DO Loop.