A SAS programmer wanted to create a panel that contained two of the graphs side-by-side. The graphs were created by using calls to two different SAS procedures. This article shows how to select the graphs and arrange them side-by-side by using the ODS LAYOUT GRIDDED statement. The end of the article discusses how to panel graphs for other situations.

The two (or more) graphs can come from any source: two runs of the same procedure, output from different procedures, or even graphs that you create by using PROC SGPLOT. The ODS system doesn't care where the objects come from. It is the job of the ODS system to arrange the graphs on the printed page or the screen regardless of the source.

As an example, let's create two graphs that show the fit of two different regression models. The data are 500 patients in a heart study. The first model predicts a patient's cholesterol level by using the patient's weight. The second model predicts cholesterol by using the patient's body-mass index. (The MRW variable is the Metropolitan Relative Weight, which is an older version of today's BMI.) The following SAS statements generate that data and display the fit plots for each model. 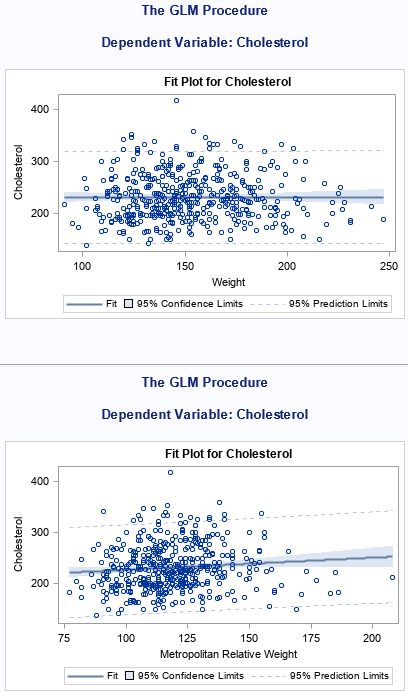 By default, the ODS system in SAS places the second graph after the first. In the first graph, the regression line is very flat, which indicates that weight is not a good predictor of cholesterol. The second graph tells a different story. The MRW index is used to identify underweight, normal weight, overweight, and obese patients. Cholesterol tends to be related to the body-mass index. Because the vertical axes of these graphs are the same, you might want to display the graphs side-by-side.

A slightly easier approach is to use the ADVANCE= option to automatically fill the cells of the panel. The following statements set up a panel that contains two columns. Each table or graph will automatically be placed in the next available cell of the panel. The following example creates only two graphs, so the result is a 1 x 2 panel. However, the same layout can create a panel that has two columns and arbitrarily many rows. The example also uses the ODS NOPROCTITLE statement to remove the procedure titles such as "The GLM Procedure" and label "Dependent Variable: Cholesterol."

The graphs now appear side-by-side and the procedure titles are not displayed.

It is worth noting that this technique also applies to combining graphs and table. For example, the following statements create a graph that contains multiple horizontal box plots. The ODS LAYOUT GRIDDED statement is used to display the graph side-by-side with a table of relevant statistics that are produced by using PROC MEANS:

Other ways to panel graphs in SAS

I can think of a few other ways to panel graphs in SAS.

You can use the ODS LAYOUT GRIDDED statement to arrange graphs in a panel. In fact, the same technique works for tables, too! The technique is most useful when you want to create a series of side-by-side graphs that are created by using SAS procedures. You can combine the technique with PROC DOCUMENT to display graphs in any order.

I primarily use this technique when arranging ODS graphics that are created by using SAS statistical procedures. If you have access to the data and are creating the data yourself, use the SGPANEL procedure, which provides more control over how the graphs are displayed.

The post Use ODS to arrange graphs in a panel appeared first on The DO Loop.