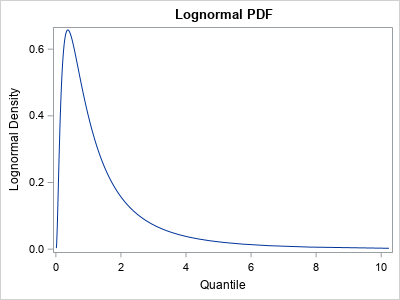 The following SAS DATA step uses the QUANTILE function to compute extreme quantiles in the left and right tails of the lognormal distribution. The quantiles are associated with the probabilities p=1E-k and p=1 – 1E-k for k=8, 9, 10, ..., 15. 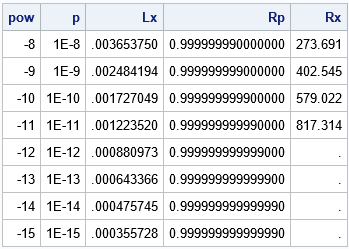 From experimentation, it appears that the QUANTILE function returns a missing value when the probability argument is greater than or equal to 1 – 1E-12. The SAS log displays a note that states
NOTE: Argument 2 to function QUANTILE('Normal',1) at line 5747 column 9 is invalid.
This means that the function will not compute extreme-right quantiles. Why? Well, I can think of two reasons:

The previous paragraph does not mean that you can't compute extreme-right quantiles. It means that you should use a function that is specifically designed to handle probabilities that are close to 1. The special function is the SQUANTILE function, which uses asymptotic expansions and other tricks to ensure that extreme-right quantiles are computed accurately. If x is the value returned by the SQUANTILE function, then 1 – CDF(x) = p. You can, of course, rewrite this expression to see that x satisfies the equation CDF(x) = 1 – p.

The following SAS DATA step is a modification of the previous DATA step. It uses the SQUANTILE function to compute the extreme-right quantiles: 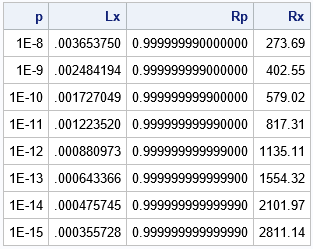 When p is small, the "loss-of-precision problem" (representing 1 – p in finite precision) also affects the computation of the cumulative probability (CDF) of a distribution. That is, the expression CDF("Distrib", 1-p) might not be very accurate because 1 – p loses precision when p is small. To counter that problem, SAS provides the SDF function, which computes the survival distribution function (SDF). The SDF returns the right-tail quantile x for which 1 – CDF(x) = p. This is equivalent to finding the left-tail quantile that satisfies CDF(x) = 1 – p.

The following DATA step computes several one-sided probabilities. For each value of x, the program computes the probability that a random lognormal variate is greater than x: 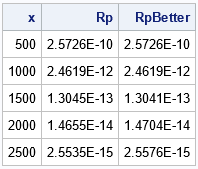 The difference between the probabilities in the Rp and RpBetter columns are not as dramatic as for the quantiles in the previous section. That is because the quantity 1 – CDF(x) does not lose precision when x is large because CDF(x) ≈ 1. Nevertheless, you can see small differences between the columns, and the RpBetter column will tend to be more accurate when x is large.

The post Tips for computing right-tail probabilities and quantiles appeared first on The DO Loop.