What is a monotone sequence?

Test for monotone increasing in SAS

The following SAS/IML module evaluates a vector and tests whether the elements are increasing. It uses the DIF function to produce a vector that contains the difference between adjacent elements of the input vector. That is, if x = {x1, x2, x3, ..., xn} is the input vector, then d = diff(x,1,1) is the vector {x2-x1, x3-x2, ..., xn-x[n-1]}. The second argument specifies the lag. The third argument is a flag that specifies whether the result is padded with missing values. (See the Appendix for more information.) By default, the function tests for a weakly increasing sequence.

Test for monotone decreasing in SAS

The sequence is weakly decreasing but not strictly decreasing. The first call to the IsDecr function returns 1. The second call returns 0.

An application: Test whether a transformation is monotonic

I used the IsIncr function to address a general question: Can you detect whether an unknown univariate function is monotonic increasing?

In a recent project, I was modeling the cumulative distribution function (CDF) of an unknown continuous distribution. By definition, a CDF must be increasing, but for some values of the parameters, the model is not an increasing function. I needed to identify these "infeasible" parameter values in a quick and reliable manner. 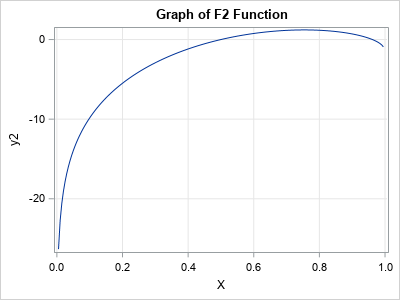 The accuracy of this method depends on choosing a sequence on a fine grid of points in the domain. It assumes that the derivative of the function is bounded so that function cannot quickly increase and decrease on one of the small gaps between consecutive elements of the sequence.

These numerical tests evaluate a function at a finite set of points. Consequently, they can rule out the hypothesis of monotonicity, but they do not prove that the function is increasing everywhere. Nevertheless, these tests work well in practice if you choose the input sequence on a fine grid in the domain. If you have a mathematical bound on the derivative of the function, you can say more.

Appendix: A useful option for the DIF function

By default, the DIF function in SAS/IML returns a vector that is the same size as the input vector. If k is the lag parameter, the first k elements are missing values. The differences between elements are contained in the elements k+1, k+2, and so forth. If you specify, the value 1 for the third option, the DIF function deletes the leading missing values. The result is a vector that has n – k elements, where n is the length of the input vector and k is the lag parameter.

For example, the following example passes in k=1 and deletes the leading missing value for the result:

The post A test for monotonic sequences and functions appeared first on The DO Loop.