An integer can be represented in many ways. This article shows how to represent a positive integer in any base b. The most common base is b=10, but other popular bases are b=2 (binary numbers), b=8 (octal), and b=16 (hexadecimal). Each base represents integers in different ways. Think of a "representation" as a name that is assigned to each integer. This article shows a mathematical algorithm for representing an integer in base b ≥ 2. It implements the algorithm by using the SAS DATA step.

This process is commonly called "converting" an integer from base 10 to base b, but that is a slight misnomer. An integer has an intrinsic value regardless of the base that you use to represent it. We aren't converting from base 10, although we typically use base 10 to input the number into a computer. I prefer to use the term "represent the integer" when discussing the process of writing it in a specified base.

Represent an integer in any base

An algorithm to represent an integer in any base

There is a simple iterative algorithm to represent a positive integer, x, in any base b ≥ 2. The steps in the algorithm are indexed by an integer i=0, 1, 2, ..., k-1, where k is the smallest integer such that x < bk.

This process is summarized in the following table for base 8 and the base-10 integer 675: 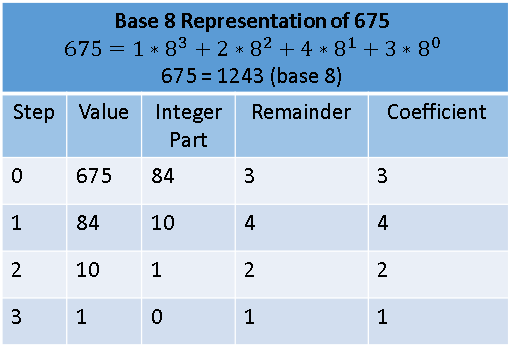 A SAS program for representing an integer in an arbitrary base

Let's put a set of base-10 numbers into a data set:

Because we want to store the representation in a character variable, we set the length of the variable by using the parameter MAXCOEF=32. A string of length 32 is usually sufficient for representing a wide range of integers. The VALUELIST macro defines the set of characters to use to represent each integer as a string for bases b=2, 3, ..., 36. If you want to use a larger base, extend this set of values.

Convert base 10 to octal or hexadecimal

To represent a positive integer in a different base, simply redefine the BASE macro variable and rerun the program. For example, the following statements enable you to convert the numbers to base 8:

For hexadecimal (base 16), you can use the letters 'A' through 'F' to represent the larger values of the coefficients:

The hexadecimal numbers might be familiar to statistical programmers who use hexadecimal values for RGB colors in statistical graphics. In many programming languages, you can specify a color as a hexadecimal value such as 0x1F313F. The first two digits ('1F') specify the amount of red in the color, the next two digits ('31') specify the amount of green, and the last two digits specify the amount of blue. As an integer, this number is 2044,223 (base 10). You might have seen an advertisement for a computer monitor that claims that the monitor "displays more than 16 million colors." That number is used because FFFFFF (base 16) = 16,777,215 (base 10). In other words, if each red, green, and blue pixel can display 256 colors, the total number of colors is more than 16 million.

This article shows an algorithm that enables you to represent a positive integer in any base. This is commonly called "converting from base 10," although that is a misnomer. At each step of the algorithm, you use division by the base to find the integer part and remainder of an integer. This algorithm is demonstrated by using the SAS DATA step. As written, the program supports bases 2–36.

The post Convert integers from base 10 to another base appeared first on The DO Loop.