A common question on SAS discussion forums is how to use SAS to generate random ID values. The use case is to generate a set of random strings to assign to patients in a clinical study. If you assign each patient a unique ID and delete the patients' names, you can preserve the patients' privacy during data analysis.

A common requirement is that the strings be unique. This presents a potential problem. In a set of random values, duplicate values are expected. Think about rolling a six-sided die several times: you would expect to see a duplicate value appear after a few rolls. Even for a larger set of possible values, duplicates arise surprisingly often. For example, if a room contains 23 people, the Birthday Paradox shows that it is likely that two people in the room have the same birthday!

If you generate N random numbers independently, you will likely encounter duplicates. There are several ways to use SAS to achieve both randomness and unique values. Perhaps the easiest way is to start with a long list of unique values, then randomly select N of these values. You can do the selection in either of two ways:

A third way to obtain random strings without duplicates is to use a SAS/IML program.

A mapping between strings and integers

I have previously shown that you can associate each string of English characters with a positive integer. For most applications, it suffices to consider four-digit strings because there are 264 = 456,976 strings that contains four English characters from the set {A, B, C, ..., Z}. Thus, I will use four-character strings in this article. (If you use five-character strings, you can assign up to 11,881,376 unique IDs.)

The following SAS DATA step outputs the integers 0 through 264-1. For each integer, the program also creates a four-character string. Small integers are padded with "leading zeros," so that the integers 0, 1, 2, ..., 456975, are associated with the base 26 strings AAAA, AAAB, AAAC, ..., ZZZZ. See the previous article to understand how the program works.

The table shows the first few and the last few observations in the data set. The ID column contains all four-character strings of English letters, except for words on a denylist. The list of objectionable words can be quite long, so I included only a few words as an example. I left out the F-bomb, other vulgar terms, and racist slurs. The appendix contains a more complete denylist of four-letter words.

The first step created a list of unique four-character ID values. The second step is to randomly select N elements from this list, where N is the number of subjects in your study that need a random ID. This section shows how to perform random selection by permuting the entire list and selecting the first N rows of the permuted data.

The following DATA step generates a random uniform number for each ID value. A call to PROC SORT then sorts the data by the random values. The resulting data set, RANDPERM, has randomly ordered ID values.

You can use PROC PRINT to see that the ID values are randomly ordered. Because we started with a list of unique values, the permuted IDs are also unique. 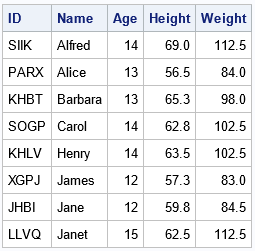 The output shows that each student is assigned a random four-character ID.

Use PROC SURVEYSELECT to select IDs

The previous section uses only Base SAS routines: The DATA step and PROC SQL. An alternative approach is to extract N random IDs by using PROC SURVEYSELECT in SAS/STAT software. In this approach, you do not need to generate random numbers and manually sort the IDs. Instead, you extract the random values by using PROC SURVEYSELECT. As of SAS 9.4 M5, the SURVEYSELECT procedure supports the OUTRANDOM option, which causes the selected items in a simple random sample to be randomly permuted after they are selected. Thus, an easier way to assign random IDs is to count the number of subjects, randomly select that many ID values from the (unsorted) set of all IDs, and then merge the results: 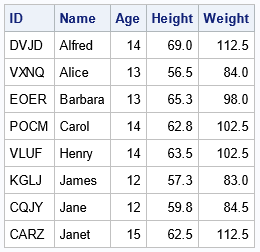 The table shows the ID values that were assigned to the first few subjects.

Both previous methods assign random strings of letters to subjects. However, I want to mention a third alternative because it is so compact. You can write a SAS/IML program that performs the following steps:

As usual, the SAS/IML version is very compact. It requires about a dozen lines of code to generate the IDs and write them to a data set for merging with the subject data: 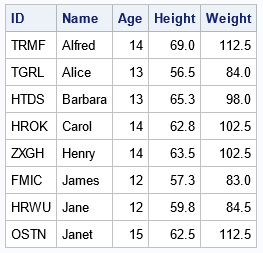 This article shows how to assign a random string value to subjects in an experiment. The best way to do this is to start with a set of unique strings. Make sure there are no objectionable words in the set! Then you can extract a random set of N strings by permuting the set or by using PROC SURVEYSELECT to perform simple random sampling (SRS). In the SAS/IML language, you can generate all strings and extract a random subset by using only a dozen lines of code.

In a DATA step, I used base 26 to generate the list of all four-character strings. By changing the definition of the nChar macro variable, this program also works for character strings of other lengths. If you set the macro to the value k, the program will generate 26k strings of length k.

Of the three methods, the first (DATA step and PROC SORT) is the simplest. It can also easily handle new subjects who are added to the study after the initial assignment of IDs. You can simply assign the next unused random IDs to the new subjects.

Appendix: A denylist of four-letter words

This appendix shows a list of objectionable words. You do not want to assign a patient ID that is obscene, profane, insulting, racist, sexist, or crude. I used several web pages to compile a list of four-letter words that some people might find objectionable. You can use an IF-THEN statement to block the following list four-letter English words:

The post Generate random ID values for subjects in SAS appeared first on The DO Loop.