Let’s consider the following ubiquitous scenario. You have created a SAS program that you want to run automatically on schedule on a SAS server under the Microsoft Windows operating system.

If you have SAS® Enterprise BI Server or SAS® BI Server and Platform Suite for SAS you can do the scheduling using the Schedule Manager plug-in of SAS Management Console.

But even if you only have SAS Foundation installed on a Windows server (or any Windows machine), you can automate/schedule your SAS program to run in batch using Windows Task Scheduler. In order to do that you would need a Windows batch file.

What are Windows batch files?

A Windows batch file (or batch script) is a text file consisting of a series of Windows commands executed by the command-line interpreter. It can be created using a plain text editor such as Notepad or Notepad++ and saved as a text file with the .bat file name extension. (Do not use a word processor like Microsoft Word for batch script writing!)

Historically, batch files originated in DOS (Disk Operating System), but modern versions of Windows continually support them. Batch files get executed when you double click on them in Windows File Explorer or type & enter their name in the Command Prompt window.

Even though Windows batch files are not as powerful as PowerShell scripts or Unix/Linux scripts they are still quite versatile and useful for automating processes running SAS in batch mode.

Besides simply running a bunch of OS command sequentially one after another, batch scripts can be more sophisticated. For example, they can use environment variables (which are similar to SAS macro variables). They can use functions and formats. They can capture exit code from one command (or SAS program) and then, depending on its value, conditionally execute a command or a group of commands (which might include another SAS program or another batch script). They can even do looping.

They can submit a SAS program to run by SAS System in batch mode and pass to this program a parameter string.

They can control where SAS program saves its log and generate a dynamic log file name adding a datetime stamp suffix to it.

Let’s explore a couple of examples.

Here, we define several environment variables (proj, name, pgm, log) and reference these variables by surrounding their names with %-sign as %variable-name% (analogous to SAS macro variables which are defined by %let mvar-name = mvar-value; and referenced as &mvar-name).

This script will initiate SAS session in batch mode which executes your SAS program mysasprogram.sas and outputs SAS log as mysasprogram.log file.

Batch scripts are often used to run a SAS programs repeatedly at different times. In order to preserve SAS log for each run, we can assign unique names for the log files by suffixing their names with a date/time. For example, instead of saving SAS log with the same name mysasprogram.log we can dynamically generate unique names for SAS log, e.g. mysasprogram_YYYYMMDD_HHMMSS, where YYYYMMDD_HHMMSS indicates the date (YYYYMMDD) and time (HHMMSS) of run. This will effectively keep all SAS logs and indicate when (date and time) each log file was created. Here is a Windows batch script that does it:

Let’s enhance our script by adding the following functionality:

One would expect that it can be achieved by adding the following scripting code to the above example 2:

However, you might be in for a big surprise (I was!) when you discover that my_error_email.sas program runs regardless of whether exitcode is equal on not equal to 0.  How is that possible!

Initially, DOS (and later Windows) scripts were implemented without conditional execution (IF command) and looping (FOR command) functionality and their environment variable references were resolving during script parsing. Later, when scripting language was brought to a higher standard that did include conditional execution and looping, the developers decided to keep the original  behavior of the %variable-name% references intact, but added a new form of the environment variable references !variable-name! surrounding variable names with exclamation marks. They called it "delayed expansion" and cardinally altered the variable references behavior causing them to resolve (expand) during execution time rather than parse time.

We can place this SetLocal command right before the IF section and replace variable references in it with !variable-name! . Alternatively, for consistency, we can place SetLocal EnableDelayedExpansion at the beginning of the script and replace all environment variable references with !variable-name! . In the latter case, all our variables will be resolved at execution time.  Here is the final script:

Notice, how we pass in to the my_error_email.sas program the log name of failed mysasprogram.sas:

This log name can be captured in the my_error_email.sas program by using the SYSPARM automatic macro variable:

Then, it can be used either to attach that log file to the automatically generated email or at least provide its path and name in the email body.

With Windows batch script file in place, you can easily schedule and run your SAS program in batch mode on a SAS machine that have just SAS Foundation installed using Microsoft Windows Task Scheduler. In order to do that you would need to specify your script’s fully qualified name in the Windows Task Scheduler (Create Task →  New Action → Program/script field) as shown below: 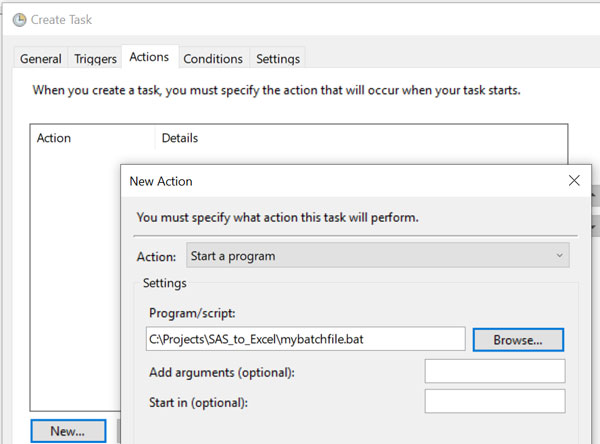 Then you would need to specify (add) new Trigger(s) that ultimately define the scheduling rules: 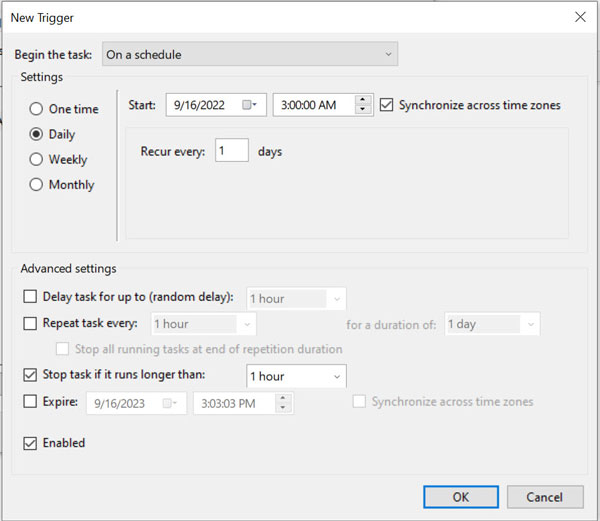 Do you have questions, concerns, comments or use other ways of automating SAS jobs? Please share with us below in the Comments section.