A profile plot is a way to display multivariate values for many subjects. The optimal linear profile plot was introduced by John Hartigan in his book Clustering Algorithms (1975). In Michael Friendly's book (SAS System for Statistical Graphics, 1991), Friendly shows how to construct an optimal linear profile by using the SAS/IML language. He displays the plot by using traditional SAS/GRAPH methods: the old GPLOT procedure and an annotation data set. If you do not have a copy of his book, you can download Friendly's %LINPRO macro from his GitHub site.

SAS graphics have changed a lot since 1991. It is now much easier to create the optimal linear profile plot by using modern graphics in SAS. This article reproduces Friendly's SAS/IML analysis to create the data for the plot but uses PROC SGPLOT to create the final graph. This approach does not require an annotate data set. 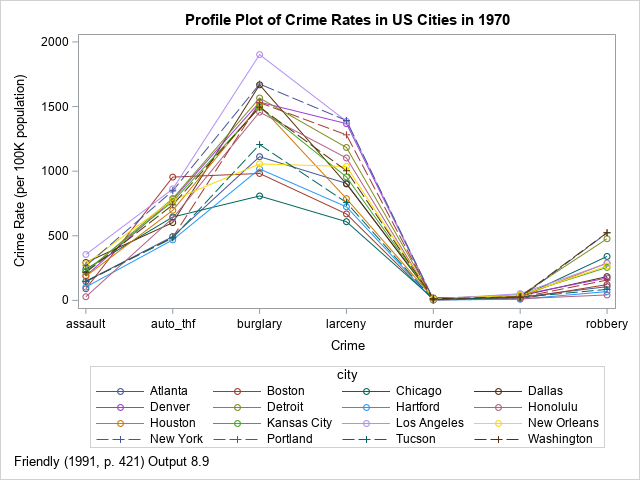 Friendly (1991) illustrates the optimal linear profile plot by using the incidence rate for seven types of crime in 16 US cities in 1970. I have previously shown how to visualize the crime data by using line plots and heat maps. A profile plot for the raw data is shown to the right.

The optimal linear profile plot modifies the profile plot in two ways. It computes an optimal ordering of the categories (crimes) and transforms the raw responses (rates) so that the transformed data are as close to linear as possible. Let's focus on the meaning of the words "linear" and "optimal":

The optimal linear profile is constructed by using the first two principal coordinates (PC) for the data (in wide form). The optimal positions are found as the ratio of the elements of the first two eigenvectors. The slopes and intercepts for the linear profiles are obtained by projecting the centered and scaled data onto the eigenspace, so they are related to the PC scores. See Friendly (1991) or the SAS/IML code for details.

The following DATA step creates the crime data in wide form. The SAS/IML program is taken from the %LINPRO macro and is similar to the code in Friendly (1991). It contains a lot of print statements, which you can comment out if you do not want to see the intermediate calculations. I made a few minor changes and three major changes: 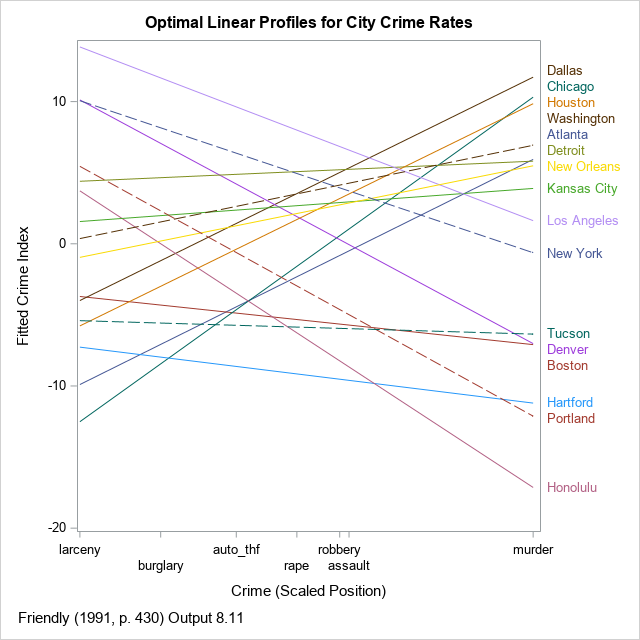 The optimal linear profile plot is shown for the crimes data. Unlike Friendly, I do not show the points along these lines. I think adding markers gives the false impression that the method has perfectly linearized the data.

The X axis shows the optimal positions of the crimes. They are roughly ordered so that crimes against property are on the left and violent crimes against persons are on the right. As is often the case, the PC interpretation does not perfectly agree with our intuitions. For these data, the analysis has placed rape to the left of robbery and assault. Notice that I use the VALUES= and VALUESDISPLAY= to specify the positions of the labels, and I use the FITPOLICY=STAGGER option to prevent the labels from colliding.

The cities can be classified according to their linear trends. For brevity, let's call larceny and burglary "property crimes," and let's call robbery, assault, and murder "violent crimes." Then you can observe the following classifications for the cities:

The following color image is copied from Friendly (1991, Appendix 3, p. 673) so that you can compare the SAS/GRAPH output to the newer output. 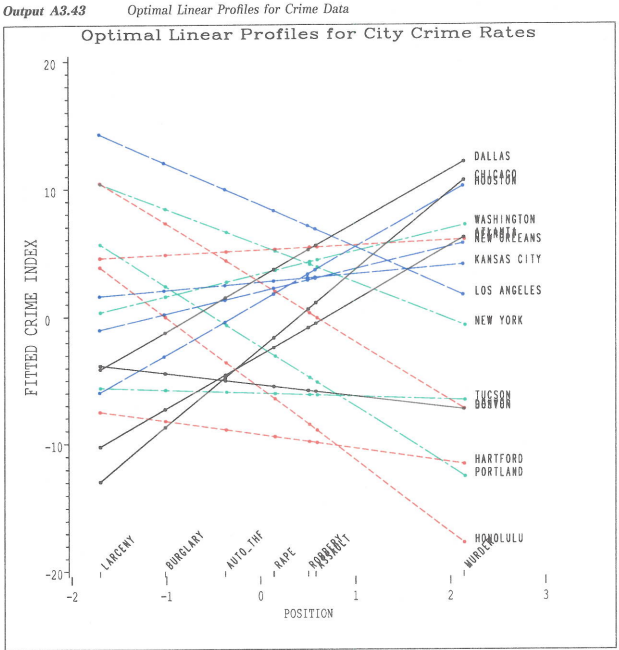 An alternative to the optimal linear profile plot

I'll be honest, I am not a big fan of the optimal linear profile plot. I think it can give a false impression about the data. It displays a linear model but does not provide diagnostic tools to assess issues such as outliers or deviations from the model. For example, the line for Boston shows no indication that auto theft in that city was extremely high in 1970. In general, there is no reason to think that one set of positions for the categories (crimes) leads to a linear profile for all subjects (cities).

If you want to show the data instead of a linear model, see my previous article, "Profile plots in SAS," and consider using the heat map near the end of the article. If you want to observe similarities and differences between the cities based on the multivariate data, I think performing a principal component analysis is a better choice. The following call to PROC PRINCOMP does a good job of showing similarities and differences between the categories and subjects. The analysis uses the correlation matrix, which is equivalent to saying that the crime rates have been standardized. 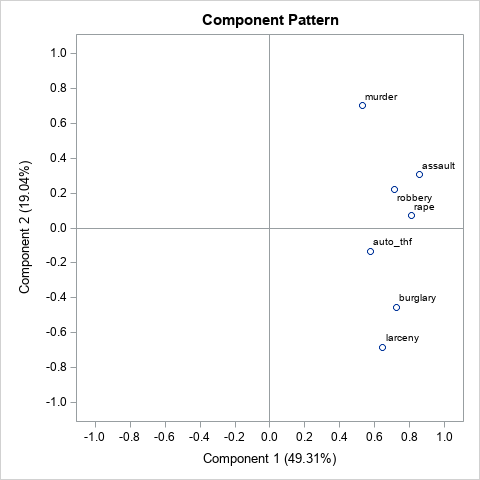 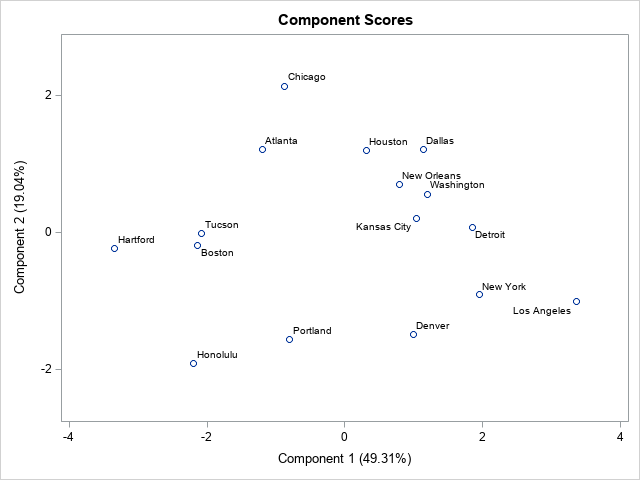 For this analysis, the "Pattern Profile Plot" (not shown) shows that the first PC can be interpreted as the total crime rate. The second PC is a contrast between property crimes and violent crimes. The component pattern plot shows that the position of the variables along the second PC is nearly the same as the positions computed by the optimal linear profile algorithm. You can see property crimes in the lower half of the plot and violent crimes in the upper half. The "Score Plot" enables you to see the following characteristics of cities:

This article reproduces Friendly's (1991) implementation of Hartigan's optimal linear profile plot. Friendly distributes the %LINPRO macro, which uses SAS/IML to carry out the computations and uses SAS/GRAPH to construct the linear profile plot. This article reproduces the SAS/IML computations but replaces the SAS/GRAPH calls with a call to PROG SGPLOT.

This article also discusses the advantages and disadvantages of the optimal linear profile plot. In my opinion, there are better ways to explore the similarities between subjects across many variables, including heat maps and score plots in principal component analysis.

The post Optimal linear profile plots in SAS appeared first on The DO Loop.