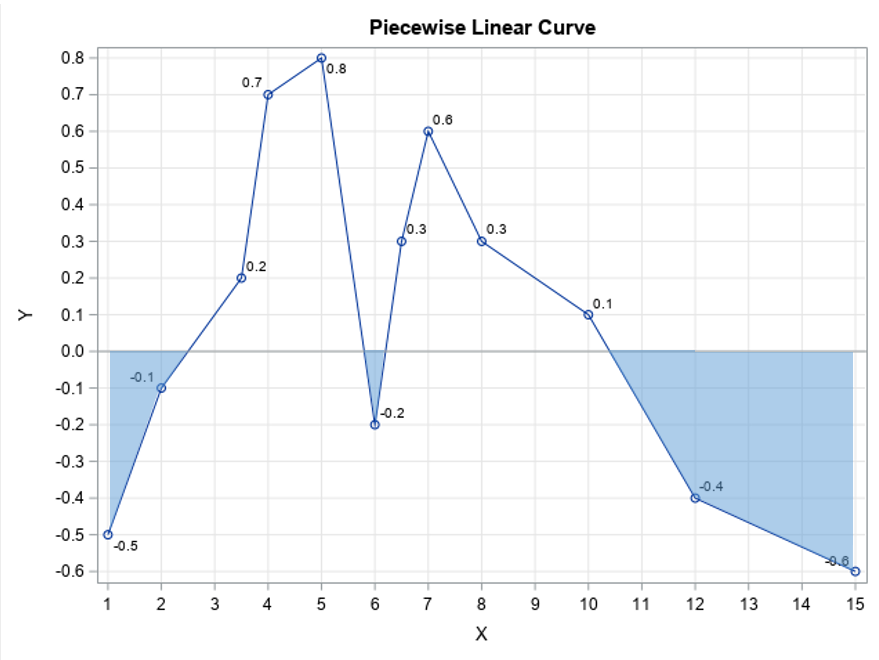 Recently, I needed to know "how much" of a piecewise linear curve is below the X axis. The coordinates of the curve were given as a set of ordered pairs (x1,y1), (x2,y2), ..., (xn, yn). The question is vague, so the first step is to define the question better. Should I count the number of points on the curve for which the Y value is negative? Should I use a weighted sum and add up all the negative Y values? Ultimately, I decided that the best measure of "negativeness" for my application is to compute the area that lies below the line Y=0 and above the curve. In calculus, this would be the "negative area" of the curve. Because the curve is piecewise linear, you can compute the area exactly by using the trapezoid rule of integration.

An example is shown to the right. The curve is defined by 12 ordered pairs. The goal of this article is to compute the area shaded in blue. This is the "negative area" with respect to the line Y=0. With very little additional effort, you can generalize the computation to find the area below any horizontal line and above the curve.

The algorithm for computing the shaded area is simple. For each line segment along the curve, let [a,b] be the interval defined by the left and right abscissas (X values). Let f(a) and f(b) be the corresponding ordinate values. Then there are four possible cases for the positions of f(a) and f(b) relative to the horizontal reference line, Y=0:

The three cases for negative area are shown in the next figure:

You can easily generalize these formulas if you want the above the curve and below the line Y=t. In every formula that includes f(a), replace that value with (f(a) – t). Similarly, replace f(b) with (f(b) – t).

The simplest computation for the negative area is to loop over all n points on the line. For the i_th point (1 ≤ i < n), let [a,b] be the interval [x[i], x[i+1]] and apply the formulas in the previous section. Since we skip any intervals for which f(a) and f(b) are both positive, we can exclude the point (x[i], y[i]) if y[i-1], y[i], and y[i+1] are all positive. This is implemented in the following SAS/IML function. By default, the function returns the area below the line Y=0 and the curve. You can use an optional argument to change the value of the horizontal reference line.

The program defines the AreaBelow function and calls the function for the piecewise linear curve that is shown at the top of this article. The output shows that the area of the shaded regions is -2.185.

The area between a curve and a reference line

As you would expect, the magnitude of the area increases as the reference line moves up. In fact, you can visualize the area below the line Y=t and the curve as a function of t. Simply, call the AreaBelow function in a loop for a sequence of increasing t values and plot the results: 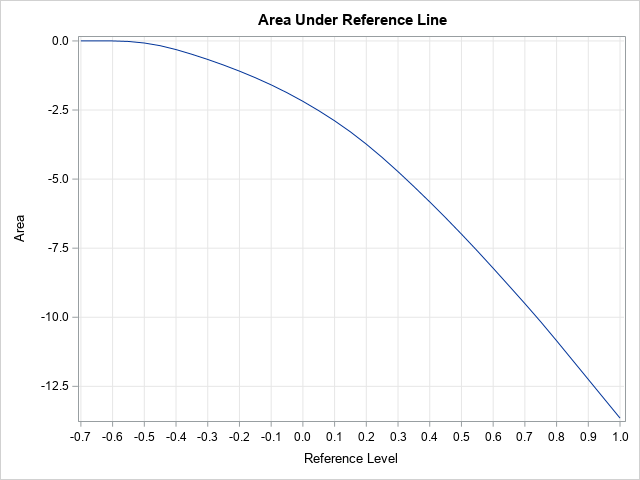 You can use numerical integration to determine "how much" of a function is negative. If the function is piecewise linear, the integral over the negative intervals can be computed by using the trapezoid rule. This article shows how to compute the area between a reference line Y=t and a piecewise linear curve. When t=0, this is the "negative area" of the curve.

The post The area under a piecewise linear curve appeared first on The DO Loop.