A colleague posted a Christmas-themed code snippet that shows how to use the DATA step in SAS to output all the possible ways that Santa can hitch up a team of reindeer to pull his sled. The assumption is that Rudolph must lead the team, and the remaining reindeer are chosen from his loyal team of Dasher, Dancer, Prancer, Vixen, Comet, Cupid, Donner, and Blitzen. The size of the team can be as small as two or as large as nine.

A fundamental rule of programming is to start with an example that is easy to program and understand. So instead of generating all combinations of eight items, let's start with generating all combinations of three items, A, B, and C. The following SAS IML program creates a three-element set. The call to the ALLCOMB function creates all subsets of size k. The call is within a DO loop, so the program creates all subsets of one item, two items, and three items. The result of the ALLCOMB function is k-column matrix where each row is a combination from the set {1, 2, 3}. Each row contains indices that you can use to extract the corresponding subsets from the set {A, B, C}. The following program prints the subsets for each value of k:

Typically, we do not want to print the output but want to save the output in a matrix or write the output to a data set. The next section puts the results in a matrix. If you want, it is easy to write a SAS IML matrix to a SAS data set.

Store all combinations as rows in matrix

The following program is almost identical to the previous one. The difference is that the program allocates a matrix that has n columns and 2n – 1 rows. Instead of printing the subsets, the subsets are assigned to the rows of the matric, as follows:

In a matrix language, you should always be alert for opportunities to improve performance by vectorizing a computation. Often, a clue that you can vectorize is when you notice a loop over all rows (or column) of a matrix. In the previous section, the inner DO loop is a loop over the rows of the matrix, p. That means that every row of p is used to extract elements of the set.

You might be surprised to learn that you can use the matrix p as an index to extract all subsets in one call. The expression set[p] returns a row vector that contains all elements in the set that are indexed by the elements of p. For example, when k=2, the elements of p (in row-major order) are {1 2 2 3 1 3}. Therefore, the expression set[p] resolves to the vector {A B B C A C}. If you reshape these elements into a matrix that has k columns, you get all pairwise combinations of the set {A B C} in a matrix. You an insert these rows into the rows of the matrix that holds the final results, as shown in the following program:

The output is exactly the same, but now the program is vectorized, which is a useful skill to acquire.

Having developed the program for a set that contains three items, how can we generalize the program to handle Santa's reindeer? Easy: Just change the definition of the set! The program can handle any (reasonably sized) set of character values.

To satisfy Santa's condition that Rudolph must lead every team, just add a new first column to the matrix that contains the results, as shown in the following program: 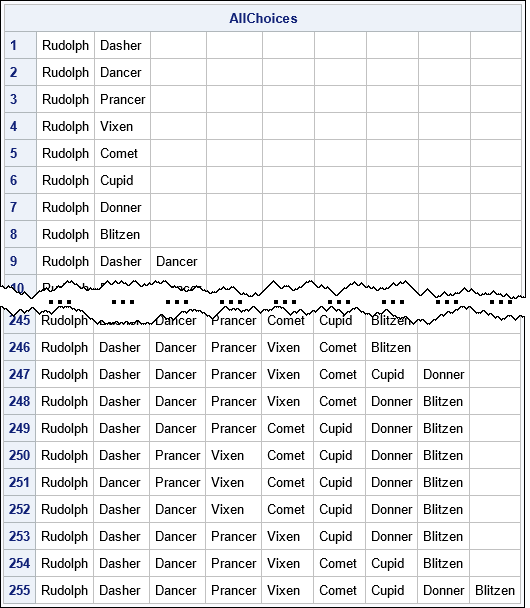 Knowing how to work with combinations in SAS is a useful skill. A colleague wrote a short DATA step (less than 20 lines) that enumerates all the ways that Santa can assemble a team of reindeer to pull his sled, assuming Rudolph is in the lead. The size of the team can be as small as two or as large as nine.

This article uses PROC IML and the ALLCOMB function to solve the same problem. The program is about the same length as the DATA step, but might be easier to explain to a mathematical audience. The article demonstrates some programming techniques that are useful for working with combinations in SAS all year long.

The post Working with combinations in SAS appeared first on The DO Loop.