The addition of the PYTHON procedure and Python editor in SAS Viya enables users to execute Python code in SAS Studio. This new capability in SAS Viya adds another tool to SAS's existing collection. With this addition I thought, how can I utilize this new found power?

In this example, I'll keep it simple. I want to create a Microsoft Excel report using a combination of SAS, Python and SQL. I'll use data that's stored in a SAS library; however, the library could be using data stored anywhere, like a path, database or in the cloud. I'll write a program that executes the following:

All code used in this post is located on GitHub, here.

Further, I'll prepare the data using the SAS DATA step. I'll use the available sashelp.cars table, create a new column named MPG_Avg, and drop unnecessary columns. Instead of using the DATA step you can use Python or SQL to prepare the data. Whatever tool works best for you.

After the data is ready, I'll use the ODS EXCEL statement to create the Excel spreadsheet. The following ODS options are used:

With the ODS EXCEL destination open I'll name the first worksheet Data, and manually specify when a new sheet is created. Next, I'll use the PRINT procedure to print the detailed data to Excel. The PRINT procedure will print the entire SAS data set with the associated formats and styles to Excel.

Next, I want to create violin plots on a new worksheet named Origin_MPG. Now, these can be created in SAS, but I personally found the matplotlib package in Python a bit easier to use . With the PYTHON procedure, I can include the Python code within the SAS program (or you can reference a .py file) to create the visualization. Then I'll use the SAS.pyplot method to save and render the visualization. Since the pyplot callback renders the image in the results tab, it exports the image to the Excel workbook by default.

First I'll use ODS EXCEL to create the new worksheet and the TITLE statement to add a title to the Excel worksheet.

Then I'll execute the PYTHON procedure to execute my Python code.

SQL is an extremely common and useful language for data analysts and scientists. I find using SQL for aggregation easy, so I will create a simple aggregation and add it below the visualization on the same worksheet in the the Excel report.

At the end of the same worksheet I'll add some simple text using the ODSTEXT procedure to give some information about the data.

Lastly, I'll close the ODS EXCEL destination since I am done writing out to Excel.

That's it! Now I'll execute the entire program and view the Excel workbook. 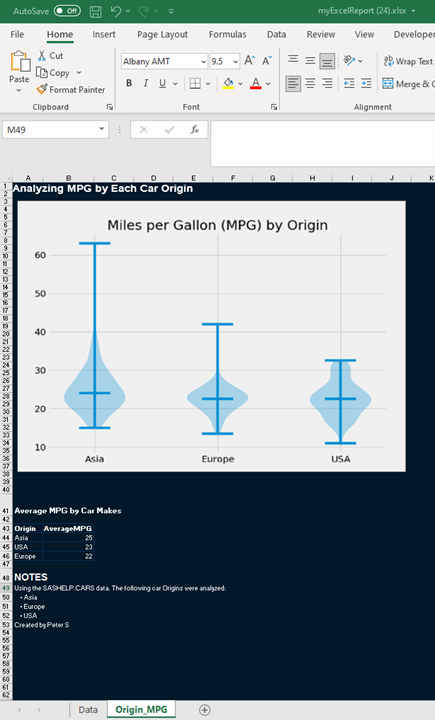 With the capabilities of SAS and the new ability to execute Python code in SAS Studio, teams have a variety of tools in SAS Viya for their analytic needs.