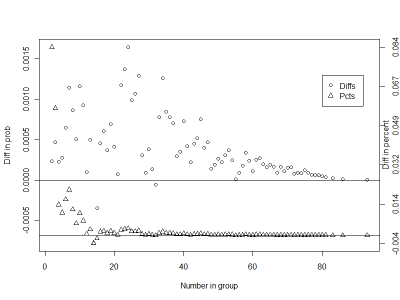 The so-called birthday paradox or birthday problem is simply the counter-intutitive discovery that the probability of (at least) two people in a group sharing a birthday goes up surprisingly fast as the group size increases. If the group is only 23 people, there is a 50% chance that two of them share a birthday, and with 40 people it's about 90%. There is an excellent wikipedia page discussing this.

However, this analytically derived probability is based on the assumption that births are equally likely on any day of the year. (It also ignores the occasional February 29th, and any social factors that lead people born at the same time of year to seek like spouses, and so forth.) But this assumption does not appear to be true, as laid out anecdotally and in press.

As noted in the latter link, any disparity in the probability of birth between days will improve the chances of a match. But how much? An analytic solution seems quite complex, even if we approximate the true daily distribution with a constant birth probability per month. Simulation will be simpler. While we're at it, we'll include leap days as well, since February 29th approaches.

Here we use arrays (section 1.11.5) to keep track of the number of days in a month and of the people in our group. To reduce computation, we'll check for matches as we add people to the group, and only generate their birthdays if there is not yet a match. We also demonstrate the useful hyphen tool for referring to ranges of variables (1.11.4).

We note here that while we allow up to 367 birthdays before a match, the probability of more than 150 is so infinitesimal that we could save the space and speed up processing time by ignoring it. Now that the groups have been simulated, we just need to summarize and present them. We tabulate how many cases of groups of size N were recorded, generate the simple analytic answer, and merge them.

It's easiest to interpret the results by way of a plot. We'll plot the absolute and the relative difference on the same image with two different axes. The axis and symbol statements will make it slightly prettier, and allow us to make 0 appear at the same point on both axes.

The results, shown below, are very clear-- leap day and the disequilibrium in birth month probability does increase the probability of at least one match in any group of a given size, relative to the uniform distribution across days assumed in the analytic solution. But the difference is miniscule in both the absolute and relative scale.

R
Here we mimic the approach used above, but use the apply() function family in place of some of the looping.

With the monthly probabilities established, we can sample a birth month for everyone, and then choose a birth day within month. We use the same trick as above to allow birth days of February 29th. Here we show code for 10,000 groups; with the simple cloud R this code was developed on, more caused a crash.

To find duplicate birthdays in each row of the matrix, we'll write a function to compare the number of unique values with the length of the vector, then call it repeatedly in a for() loop until there is a difference. Then, to save (a lot) of computations, we'll break out of the loop and report the number needed to make the match. Finally, we'll call this vector-based function using apply() to perform it on each row of the birthday matrix.

To plot the differences and percent differences in probabilities, we modify (slightly) the functions for a multiple-axis scatterplot we show in our book in section 5.6.1. You can find the code for this and all the book examples on the book web site.

The resulting plot, (which is based on 100,000 groups, tolerable compute time on a laptop) is shown at the top. Aligning the 0 on each axis was more of a hassle than seemed worth it for today. However, the message is equally clear-- a clearly larger probability with the observed birth distribution, but not a meaningful difference. 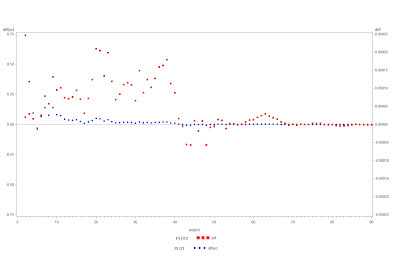