How to create a diffogram in SAS

The diffogram (also called a mean-mean scatter diagram) is automatically created when you use the PDIFF=ALL option on the LSMEANS statement in several SAS/STAT regression procedures such as PROC GLM and PROC GLMMIX, assuming that you have enabled ODS graphics. The documentation for PROC GLM contains an example that uses data about the chemical composition of shards of pottery from four archaeological sites in Great Britain. Researchers want to determine which sites have shards that are chemically similar. The data are contained in the pottery data set. The following call to PROC GLM performs an ANOVA of the calcium oxide in the pottery at the sites. The PDIFF=ALL option requests an analysis of all pairwise comparisons between the LS-means of calcium oxide for the different sites. The ADJUST=TUKEY option is one way to adjust the confidence intervals for multiple comparisons.

How to interpret a diffogram 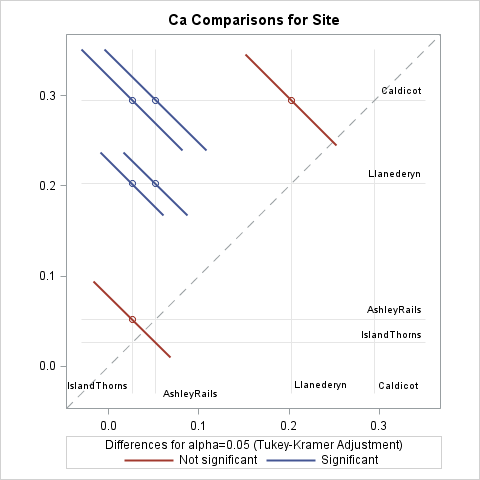 Lastly, the mean for the AshleyRails site is about 0.05, as shown by a horizontal reference line near Y=0.05. The line segment on that reference line represents the (IslandThorns, AshleyRails) comparison. It intersects the diagonal reference line, which indicates that those means are not significantly different.

The colors for the significant/insignificant pairs depends on the ODS style, but it is easy to remember the simple rule: if a line segment intersects the diagonal reference line, then the corresponding group means are not significantly different. A mnemonic is "Intersect? Insignificant!"

The mean plot with confidence interval: Use wisely! 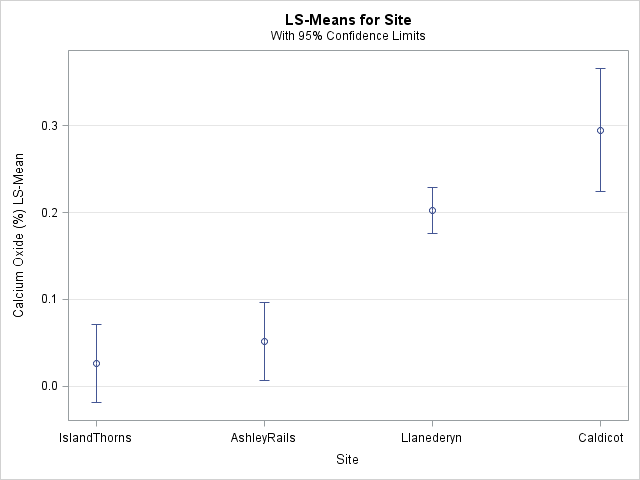 The previous section shows how to use the diffogram to visually determine which pairs of means are significantly different. This section reminds you that you should not try to use the mean plot (shown at the right) for making those inferences.

I have seen presentations in which the speaker erroneously claims that "the means of these groups are significantly different because their 95% confidence intervals do not overlap." That is not a correct inference. In general, the overlap (or lack thereof) between two (1 – α)100% confidence intervals does not give sufficient information about whether the difference between the means is significant at the α level. In particular, you can construct examples where

The reason is twofold. First, the confidence intervals in the plot are constructed by using the sample sizes and standard deviations for each group, whereas tests for the difference between the means are constructed by using pooled standard deviations and sample sizes. Second, if you are making multiple comparisons, you need to adjust the widths of the intervals to accommodate the multiple (simultaneous) inferences.

"But Rick," you might say, "in the mean plot for these data, the Llanederyn and Caldecot confidence intervals overlap. The intervals for IslandThorns and AshleyRails also overlap. And these are exactly the two pairs that are not significantly different, as shown by the diffogram!" Yes, that is true for these data, but it is not true in general. Use the diffogram, not the means plot, to visualize multiple comparisons of means.

Plot the pairwise difference of means and confidence intervals 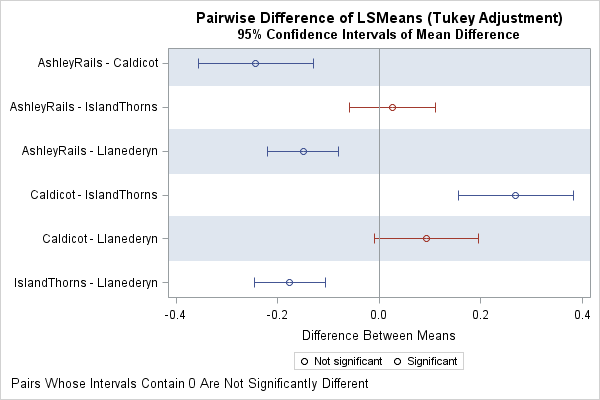 For more about multiple comparisons tests and how to visualize the differences between means, see the following references:

The post The diffogram and other graphs for multiple comparisons of means appeared first on The DO Loop.